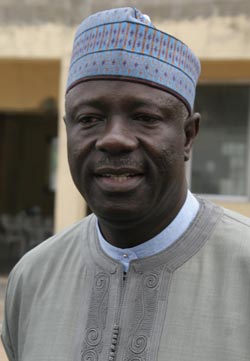 For the progress of every game, human endeavour or project, there has to be a consistent supply of resources and facilities to ensure the smooth running of such project. This is not the case with tennis in Nigeria. Most of the facilities are moribund and there is dearth of tournaments despite the fact that the country has been in the sport business for a very long time now.

Towards the end of last year, failed promises were made by officials on the need to develop the game and refurbish its facilities across the country. A visit to the tennis courts inside the National Stadium, Surulere, Lagos, is a testimony that nothing much has been done.

Despite these problems, the actors involved (players) have taken the bull by the horn and have shown determination, bearing in mind that whether they have the facilities or not, they are poised to make a difference in the sport. This is entirely motivated by their ‘Nigerian spirit’

These players have shown that they do not need all the luxuries in the world to become the best rather, determination and focus will do the magic.

Most of them are of the opinion that with good facilities in place, the country stands the chance of dominating the game on the continent.

Wheelchair tennis player, Alex Adewale, who against all odds, went to a tournament in South Africa and defeated some of the world’s finest to become one of the best in Africa, said: “We need good wheelchairs to compete with these people. They are not better than us, but they only have good facilities that we don’t have.”

While some players thought the facilities on ground are on the average to ensure good participation in world circuits, their coaches and technical officials believe that world-class facilities breed world-class players.

Nigeria’s number one female tennis player, Abinu Fatima, said: “Our facilities are just average compared to what is obtainable in other countries. I think what we need is regular tournament. Since November last year, there hasn’t been any tournament for us to play and this has been given some of us sleepless nights.”

National coach, Rotimi Akinloye, on his own part, said: “As a technical person, I can tell you that world class facilities breed world class players. I think we need to upgrade our facilities and also keep our coaches abreast of the latest techniques in the sport for us to compete with the best in the world.”

“Before we can compete with the best in the world, we need world class facilities and our coaches should be up-to-date on the latest trends in the world.

“We don’t need government to make it to the world’s Top 100. In other countries, the private sector is more involved in the sport as it requires huge finance resource to flourish. The Nigeria Tennis Federation, NTF, is trying its best but the truth is that the federation cannot do it alone,” said Akinloye.

The president of Nigeria Tennis Federation, NTF, Engr. Sani Ndanusa, however, maintained that the facilities are being upgraded on a regular basis.

He said: “Renovation is currently on going to ensure that the courts are in good shape for the players to train.

“We have great players with lots of potentials in the country. Discovering these players is one thing and getting the platforms for them to exhibit their talents is another thing. If we must really compete against the very best in the world, then our facilities too must be world standard.”

If we look at Rafael Nadal, Roger Federer or any other top player in the world when they are training or preparing for any championship, we will agree that these players are products of good facilities that have been at their disposal.

Who says Nigeria can’t have an Abdulmumuni Babalola or a Sunday Emmanuel playing in the US Open? or the likes of Abinu Fatima, Candy Idoko amongst others sweating it out in the Australian Open? Or is it a crime to have a Nigerian playing in the Olympic Games?

It’s time to do the right thing. Nigeria is too big a country to play the second fiddle in any sport to other countries of the world let alone on the continent.

The belief of many Nigerians is ‘all will be well’, but the “million dollar question” is; when will it be?