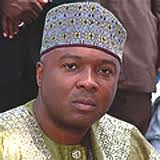 The chief Judge of the Federal High Court, Justice Ibrahim Auta, on Friday affirmed the nomination and election of former governor Bukola Saraki as the Senator representing the Kwara Central Senatorial District.

Alhaji Ayinla Kolawole Jimoh, a chieftain of the Peoples Democratic Party, PDP, had dragged the party, the Independent National Election Commission and Bukola Saraki before the court over the nomination and election of the former governor

Kolawole Jimoh, who was a Second Republic gubernatorial candidate of the Peoples Republican Party, PRP, claimed that he and not the former governor won the party’s primary election for Kwara Central senatorial district and ought to be the one representing that senatorial district at the upper legislative chamber.

The legal battle over the candidacy for the senatorial district between Bukola Saraki and Alhaji Jimoh shifted from Kwara state to the Federal High Court in Abuja soon after the elections were conducted.

Alhaji Jimoh claimed that as at the time of collection and submission of nomination forms for the senatorial election, Saraki was a presidential contestant and that Saraki’s election as the PDP senatorial candidate for the senatorial district at the re-run of the party primary election held in Ilorin on 29 January 2011, was illegal, unconstitutional, null and void.

He also sought to restrain the PDP from authenticating, recognising, or accepting the result of the re-run primary election and the nomination of the former governor as the PDP senatorial candidate for the Kwara Central senatorial district.

But the court, while delivering its decision in the matter, held that Jimoh did not adduce any evidence to show that the party had done any wrong in conducting the bye election through which the former governor emerged.

Justice Auta held that the party complied with section 36(1)(b) of the Electoral Act as amended which allows the party to conduct primary election to nominate the party’s flag bearer.

According to the Chief Judge, “the plaintiff has not established any condition to warrant the relief sought as no wrong doing had been pleaded against the party in the conduct of the fresh primary election conducted for the purpose of nominating the flag bearer for the senatorial district in contention”

The judge consequently dismissed the case and made no order as to cost. He stated that the matter was between members of the same party family and as such he would not make any order as to cost.