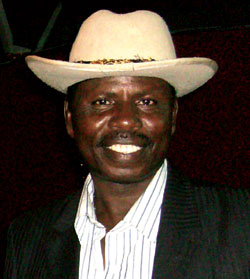 Popular Juju musician Champion Kunle Opio has signed an agreement with the management of Mariana Hotel and Suites for a weekly show tagged ‘Sunday Jump with Opio’.

P.M.Entertainment learnt that after series of meetings between the management of Opio’s band and that of the Lagos–Abeokuta road-based hotel, it was resolved that the Juju musician should commence a weekly gig at the hotel.

Speaking on the issue, Champion Kunle Opio said that the weekly gig will allow him to propagate the gospel according to Juju music.

“I have been busy rehearsing for this opportunity and I can assure you that come 8 April, I will begin a weekly jump at Mariana Hotel owned by Otunba Gbenga Akadiri,” he said.

The manager of the hotel, Alegbe Temitope confirmed the development, saying that all is now set for Champion Kunle Opio’s first show at the hotel.

“We are glad that Opio has agreed to perform at the hotel. We love his music because it is for the mature mind and our hotel too is for mature people,” he said.