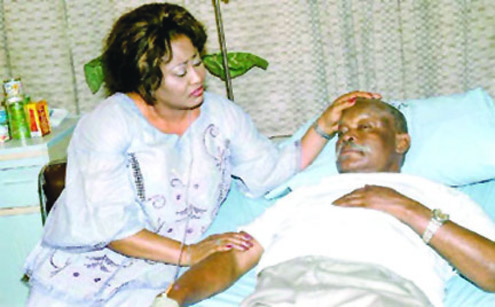 Veteran actor, Enebeli Elebuwa’s protracted battle with stroke has raised more concern among his colleagues and fans. He has been transferred to his village for traditional treatment.

His recovery at a private hospital in Lagos where he has been bedridden for some months now recently suffered a major setback, prompting his family members to seek traditional healing for him.

About three months ago, Enebeli’s health had improved. He was seen at the hospital moving his legs and arms gradually, and that obviously came as a big relief to his worried colleagues, but that seems to be a temporary development.

While his health was improving, Enebeli was visited by colleagues such as Olu Jacobs, Segun Arinze and Richard Mofe-Damijo, who also gave him a sum of N250, 000.

The donations and gesture were facilitated by the National President of the Actors’ Guild of Nigeria (AGN), Segun Arinze.

However, feelers reaching NollywoodReel now indicated that the actor’s health has turned from bad to worse, and he seriously needs prayers from all and sundry.

NollywoodReel gathered that the decision to transfer the ailing actor to his village was inevitable considering how critical his health condition seems to be at the moment.

A source told NollywoodReel that “He really needs our prayers at this sensitive period of his battle with stroke. You will likely shed tears if you see him now; his skin looks pale, and he is getting very weak by the day.”