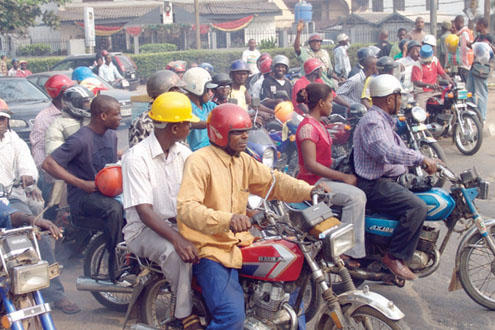 The Lagos State Government has not banned the operations of commercial motorcyclists, known as okada riders, on Lagos roads, the state attorney general said today.

The state Attorney-General and Commissioner for Justice, Mr Ade Ipaye, made the clarification while making submissions in a suit filed against the government by four commercial motorcyclists’ associations.

The association filed an application for enforcement of their fundamental rights before Justice Steven Adah of a Federal High Court, Ikeja.

Ipaye told the court that the associations brought the application based on mere newspaper reports.

“The ban or restriction alleged by the applicants has not taken place. All pieces of evidence supplied by the applicants to the court are press cuttings.There is no direct evidence regarding the true state of affairs and we all know what press reports represent. What are imminent are regulations which are facts of life in any business. It will not be appropriate in any civilised society for there not to be regulations,” Ipaye submitted.

He said that the government had nothing against using motorcycles for commercial purposes but must regulate it.

The attorney-general, therefore, urged the court to dismiss the suit.

Earlier, the applicants’ counsel, Mr Bamidele Aturu, told the court that there was no law in Lagos State which empowered the government to ban the operation of commercial motorcyclists on Lagos roads.

He said: “The state House of Assembly has not put in place any law to back the government to ban and seize commercial motorcycles or arrest the operators.

“Also, the state government does not have any authority to ban okada from federal roads.”

Aturu said that fundamental rights issues raised by the plaintiffs were not justifiable under the provisions of the 1999 Constitution and African Charter on Human and Peoples’ Rights. The commercial motorcycle operators, under the umbrella of four associations, filed the suit on 8 February.

The Lagos State Government and the state attorney-general are respondents in the suit.

The applicants alleged that the government planned to ban their operations.They stated that incessant seizure of their motorcycles by the government violated their rights to freedom of movement and possession of movable property and means of livelihood.

According to them, the rights are guaranteed by the Nigerian constitution.The associations sought, among other declarations, that the proposed ban on their operations will violate their right to freedom of movement.They prayed the court to give an order of perpetual injunction restraining the respondents from hindering commercial motorcycle operations. They also sought an order directing the respondents to release all commercial motorcycles it seized.

The case has been adjourned till 4 May ruling.