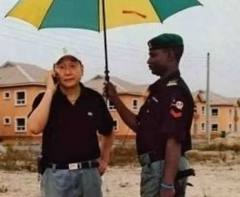 The Nigeria Police Force will henceforth monitor its personnel serving as orderlies to important personalities to ensure that they are not converted “to house helps or personal staff”. Mohammed Abubakar, acting Inspector General of Police (IG), said this in an interview with journalists in Calabar on Thursday.

Abubakar, in Calabar to inaugurate the “state of the art” Emergency Response Centre and Quick Intervention Squad said that henceforth any police orderly caught carrying bags or doing menial jobs for his principal would be arrested.

He said that the measure was meant to instil discipline and enhance professionalism in the force.

Abubakar said the duty of an orderly was to ensure the safety and well being of his or her principal and not to carry hand bags or be deployed as house helps.

“We have shifted from the issue of giving policemen to every Tom, Dick and Harry.So VIPs should take note that when we give them orderlies, they are not supposed to be turned into house boys and house girls.They are there, mainly and essentially for security duties and should serve as such.”

He commended President Goodluck Jonathan for re-equipping the Nigerian Police.

Abubakar said that the Police had created a department where a Deputy Inspector General would be in charge of Information Technology.

He said the initiative was in line with modern policing and in tracking and monitoring equipment as well as those who are supposed to be monitored.

“When they are coming to serve, we need to remodel them to do capacity building in terms of monitoring and behavioural pattern, so that we have the best out of them.

“Nigeria is the only country in the world, where people castigate their police service. We want to see a shift from that.We want to accept criticism that are real, realistic in nature because we want to change, not just for somebody to sit down and castigate the police for not doing this or that,” he said.

He urged the media to uphold and protect Nigeria’s national security and interest of Nigerians.

“We need the support of the media and the media is important key in the fight against crime and criminality by creating awareness and educating the members of the public.

“Security is the corporate interest of every Nigerian, whether you are pressmen, police officers or an investor. Development can only thrive in an atmosphere of peace and security.

He said that highway patrol would be reintroduced to ensure adequate safety on the roads and discourage road blocks by police personnel nationwide.

The IG said that in spite of security challenges faced by Nigerians, the security situation was better than what obtained in most countries.

He called on Nigerians to give the needed cooperation to the police, so that police personnel could serve them better.

“We need people’s support. We want to change the police service, we have the methods, strategies and ideas, but it is for Nigerians to give us the needed cooperation,’’ he said.