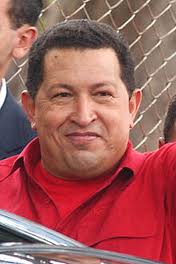 Venezuelan President Hugo Chavez made an emotional plea this week that put his health and political future in the spotlight, begging God “don’t take me yet” at an Easter mass after months of brave faces and reassuring words.

A day after arriving home from Cuba where he is undergoing a second round of radiation for recurrence of cancer he said he thought he had beaten, Chavez attended Holy (Maundy) Thursday mass in his home state of Barinas, and let loose an emotional public appeal to the heavens.

Flanked by family members in his political home, Chavez, 57, wore a rosary around his neck, and with his voice breaking, asked God: “Please don’t take me yet.

“Give me your crown of thorns, Christ, I will bleed; Give me your cross, 100 crosses — and I will carry them for you. But give me life, because I still have things to do for my people and my country.”

After more than a year of confident words from the gregarious and tough-talking president, it was a stunning turning of the political page: Chavez acknowledged the possibility of a future without him.

“In that extremely moving moment, he has acknowledged there is a chance he will be leaving the political arena,” sociologist Carlos Raul Hernandez of the Central University of Venezuela told AFP. “He was in an emotionally desperate state.”

Political analyst Carmen Beatriz Fernandez of pollsters Dataestrategia agreed: “The veil of silence and mystery about his illness is now off,” she said.

“It was like a medical report… He has made it clear his illness is fatal.”

Chavez has been in power since 1999. He faces a stiff challenge from 39-year-old state governor Henrique Capriles, who was chosen to represent a unified opposition in primaries earlier this year.

He has yet to allow publicly that he might not be up to the campaign ahead. His Twitter account Saturday said he had “6 months to open the door to the future” for Venezuela, alluding to the election.

The official deadline for registration of candiates for political parties is June 11, and the government at no point has allowed that there could be a ruling party candidate other than the president.

But local media have speculated Foreign Minister Nicolas Maduro and Vice President Elias Jaua as well as lawmaker Diosdado Cabello could be on deck and ready for prime time.

The problem for Chavez’ “revolutionary” socialist party: Cabello “cannot win the election and neither can Maduro or Jaua,” Fernandez said.

Earlier Chavez said he will be traveling to Cuba again Saturday to undergo a third round of radiotherapy in the hope of beating his cancer diagnosed last year.

Chavez is expected to complete five weeks of radiation treatment in Havana, but return home for brief periods during that time. He completed the first two rounds of treatment in Havana, where he had surgery last month to remove a malignant tumor in the same area where another tumor was excised in June 2011.

Officials in Caracas have never specified the type of cancer the president has, but earlier insisted it had not spread to other organs.

Some 18 million Venezuelans will be eligible to vote in the October ballots.