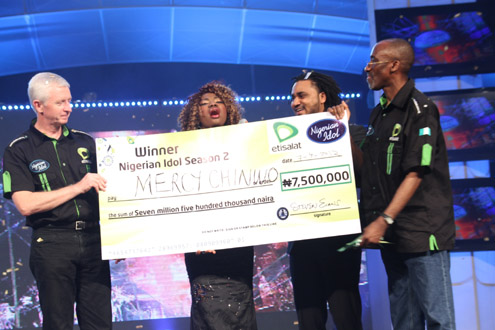 On the evening of Sunday 8 April, Mercy Chinwo Nnenda emerged winner of the second edition of the Nigerian Idol, the music reality TV show, sponsored by Etisalat. Mercy beat crowd favourite, Joe Blue to the title, after she received the highest number of votes sent through SMS by millions of viewers.

And by emerging winner, Mercy walked away with the top prize of a N7.5million recording contract, an SUV and a cash of prize of about $100,000 (N15million).

The show kicked off with rib-cracking jokes reeled out by rising standup comedian, Elenu. The comedian helped to sustain the frenzy inside the Dreams Studio, Ikeja, Lagos, until the show hosts, on-air personality Ill Ryhmz and diva Tiwa Savage called the 12 finalists to render the National Anthem which was followed by a string of performances by Chuddy K, W4, Wizkid, and M.I.

Judges Yinka Davies, Jeffery Daniels and Charly Boy commended the outstanding and brilliant performances displayed by both Mercy and Joe Blue throughout the six months duration of the reality show.

Mercy thanked God and her family for their support during the competition. She also thanked the sponsors of the show for the platform, while also urged Nigerian youths never to give up on their dream.

Mercy Chinwo’s first song as the new Nigerian Idol was The Moment, written by John Ekpai and produced by Kehinde Dacosta Lawrence and Joe Joel.