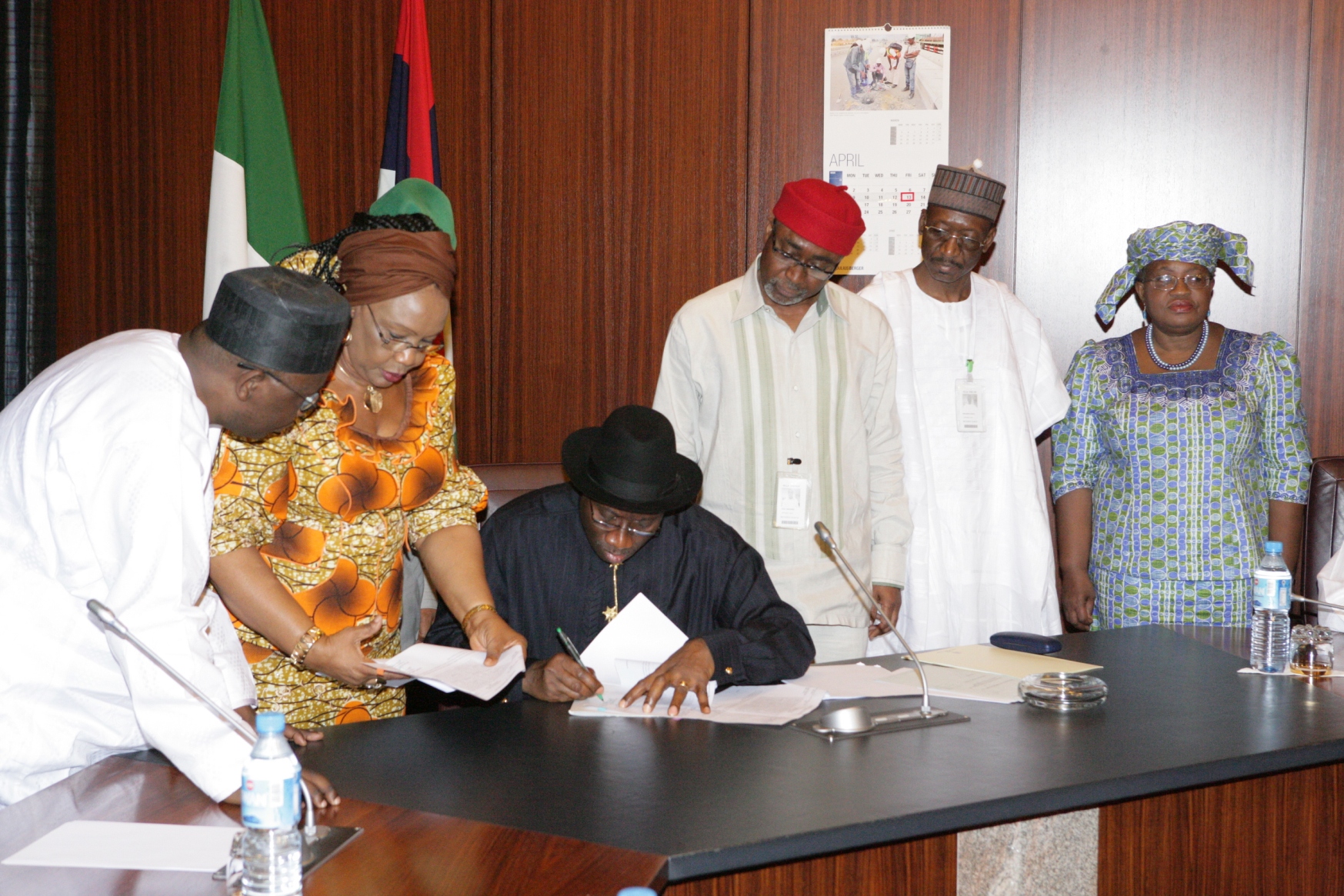 The President had on December 13, 2011 presented a budget Proposal with a total expenditure of N4.749 trillion based on a benchmark oil price of US$70 per barrel to the National Assembly for appropriation. A total of N1.32 trillion was proposed for capital expenditure while N3.429 trillion was for recurrent expenditure.

The President had initially refused to signed the budget based on the tinkering with the benchmark oil price and other assumptions by the National Assembly. But speaking while signing the budget today, President Jonathan said the executive has reached an amicable settlement with the lawmakers over the issue.

“We have had extensive discussions with the National Assembly since then, and the result is the Budget that I now have the honour of signing into law today. It is a Budget of fiscal consolidation, inclusive economic growth and job creation.

The Budget has an aggregate expenditure of N4.697 trillion (excluding the appropriation of N180 billion for programmes and projects encapsulated under the SURE-Progamme).

The total Federal Government revenue forecast is N3.561 trillion based on a Benchmark Oil Price of US$72 per barrel, which is US$2 higher than the initial proposal of US$70 per barrel.

“The additional resources were used to increase the capital and to reduce the deficit to a manageable level that we can finance without excessive borrowing”, said Jonathan.

Details of the expenditure are summarised below:

· Capital Expenditure is N1.34 trillion, which is 28.5 percent of the aggregate expenditure. One of the main goals of this administration is to complete and exit the large stock of ongoing projects and programmes. Thus, the 2012 budget is focused on completing viable ongoing projects, in accordance with the Transformation Agenda,which will quickly deliver tangible and significant added value to Nigerians. Furthermore, our approach to funding the development of critical infrastructure in Nigeria is to involve the private sector, which has the capital and implementation capacity to successfully deliver specific infrastructure projects.

· Non-debt Recurrent Expenditure is at N2.425 trillion, which is 52 percent of the total budget compared to 54 percent of the aggregate budget in 2011. This is in line with Government’s determination to correct the structural imbalance in our expenditure profile where recurrent spending has outstripped the growth of spending on capital projects in recent times.

“The goal of achieving positive macroeconomic stability is no end in itself. The robust growth experienced in recent years needs to be translated into tangible and concrete improvement in the living standards of our people. In this respect, the Government is focused on investments in priority sectors in order to sustain economic growth and create jobs. The 2012 Budget is geared toward supporting economic growth and employment creation” said President Jonathan.

The budget signing ceremony was witnessed by leaders of the National Assembly, and members of the Federal Executive Council.