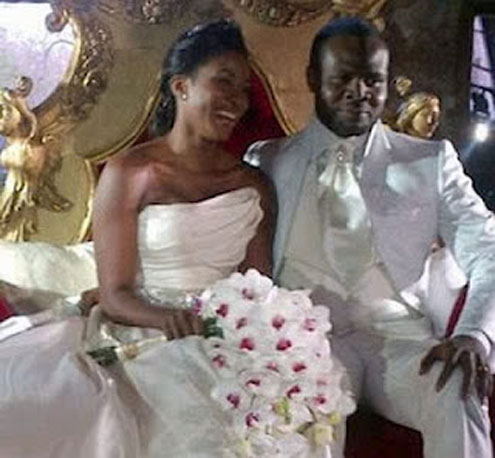 •Stephanie and Linus during the wedding

The much talked about wedding between Nollywood star actress, Stephanie Okereke and Linus Idahosa eventually held as scheduled in Paris, France over the weekend. Some of Stephanie’s colleagues that made it to the event include Richard Mofe-Damijo, Genevieve Nnaji, Ini Edo, Monalisa Chinda and Emem Isong.

Linus Idahosa is an international businessman and the Chief Executive Officer of Delyork International. His romance with Stephanie started about three years ago following the divorce of the actress from her estranged footballer husband.

Held at Abbaye Des Vaulx De Cemay 78720 Cemay-La-Ville, Paris, Stephanie’s wedding has been dubbed the most stylish and glamorous by any Nollywood personality so far. The strictly-by-invitation nuptial was said to have lived up to its expectations that one could easily take it for a royal wedding.

A source at the wedding told NollywoodReel that: “It was indeed a classy event. The venue, ambience and organization actually portrayed Stephanie and Linus as super celebrities that they are. It was full of fun.”

NollywoodReel gathered that the actress had invited just a handful of her colleagues, while majority of guests expected at the exclusive wedding are those in the corridors of power, including President Goodluck Ebele Jonathan, a very close friend of the actress.