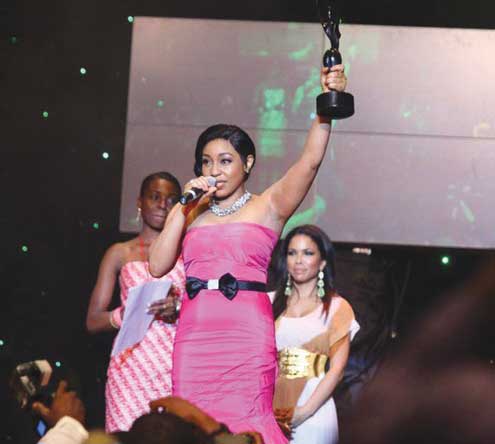 At the ceremony that had in attendance top Hollywood and African movie stars, the two shined and everyone agreed that they both deserved the honours.

Dominic won the academy’s prize as Best Actress in a Leading role for her gripping role in Kenyan movie, Shattered, beating the likes of Nse Ikpe-Etim, Uche Jombo and Yvonne Okoro. Michel, who had been nominated in the same category of Best Actor for four consecutive years clinched the title this year for his performance in the movie, ‘Somewhere In Africa’.

Kunle Afolayan’s Phone Swap wasn’t left out as it won the Achievement in Production Design award while Akin Omotoso won the Special Jury award for Man on the Ground, a Nigeria/South Africa joint xenophobic-themed production.

A minute silence was observed in memory of some stars that died within the last year including Sam Loco Efe, Ashley Nwosu, Christy Essien Igbokwe, Geraldine Ekeocha and Olalekan Oladipupo.

Peace Anyiam-Osigwe, CEO and Founder, AMAA, said no matter what, Nollywood has helped to redefine movie industry in the African continent. “Therefore, kudos must be given to all the players in the industry.”

She called on African leaders to break down all the territorial boundaries so that African filmakers can move across countries to shoot movies.

The show was hosted by Haitian-born Jimmy Jean-Louis and Nigerian actor, O.C. Ukeje.