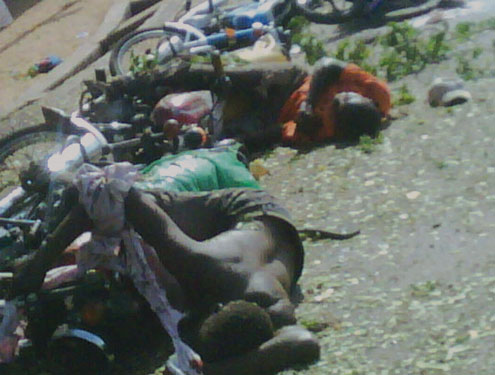 A suicide bomber on auto-bike, believed to be a member of the Boko Haram sect rammed into the convoy of the Commissioner of Police in Jalingo early today, killing at least two civilians, including himself.

But the police officer escaped unharmed.

Some accounts said no fewer than 10 people died, but there was no official confirmation of the figure.

The explosion, which injured many people, resonated around the usually calm town, which is the capital of the north eastern state of Taraba.

An eyewitness told P.M.NEWS that the bomb explosion occurred at the Government House roundabout when the suicide bomber rammed into the convoy of the state Commissioner of Police, Alhaji Sule Mamani, who was passing through the area to his office at about 9 a.m.

As at press time, doctors, nurses and other medical personnel at Federal Medical Centre, Jalingo were working feverishly to save the lives of the injured victims.

The explosion, which is the first since the incident of Boko Haram bombings in many parts of the North forced the residents of Jalingo to run helter skelter.

Security operatives comprising the army and police have been moved to the scene of the bombing and investigation has commenced into the incident.

While the commissioner of police and his convoy escaped narrowly the bomb attack, his official vehicle, a new model of BMW car, in which he was driving, was badly damaged and his pilot rider was badly injured and he is one of the victims receiving treatment in the hospital.

Taraba’s police authorities confirmed three persons dead. Spokesman, Ibiang Mbaseki told AFP: “the bomber died with two others, who were passersby”. Meanwhile, to commiserate with the families of victims who lost their lives when Bayero University, BUK, Kano, Kano State, Northwest Nigeria, was bombed yesterday, authorities of the University have declared today as a day of mourning.

P.M.NEWS gathered that today has been declared lecture-free-day by BUK authorities. Non-academic staff will also observe it.

The spokesman of BUK, Mustapha Zahradeen confirmed this morning to our correspondent the position of the university.

He said the institution will be mourning throughout the day and as such there will be no lectures or work.

The corpse of Professor Andrew Leo Ogbonyomi, an indigene of Kogi State who died in the bomb attack is still in the mortuary. His colleague, Professor Jerome Ayodele Faniyi from Ekiti State is alive but was injured during the explosion.

Yesterday morning, 16 persons including Prof. Leo Ogbonyemi were killed while Christians were worshipping at a lecture theatre at Bayero University, Kano.

Several people were injured and were later rushed to the hospital.

The Christians were first attacked with gunshots which was followed by Improvised Explosive Device, IED, which was thrown into the hall by unknown assailants believed to be members of Boko Haram.

In another attack, Nigerian Islamist sect Boko Haram killed four people at a Sunday church service in the northeast town of Maiduguri, police said on Monday, adding to the death toll from a separate shooting in the country’s second largest city Kano.

Gunmen killed at least 15 people and wounded many more at a Christian service in Kano on Sunday, the latest round of violence which has seen hundreds killed in the mostly-Muslim north of Nigeria this year.

No group took responsibility for either attack and it was not clear if they were coordinated. But both strikes bore the hallmarks of the Boko Haram sect, which has used bomb and gun attacks in its push to carve out an Islamic state in Africa’s most populous nation.

“Boko Haram who were six in number came in a Volkswagen Golf car and shot the pastor and three others while they were about to administer the Holy Communion to worshippers,” Maiduguri police spokesman Samuel Tizhe said.

Maiduguri is the capital of northeast Borno state, Boko Haram’s home region and the location of the majority of its attacks, which mostly target the police and military but have also hit churches and drinking spots.

In the attack in Kano on Sunday, gunmen arrived on motorbikes at a university lecture theatre used for Christian services and threw small homemade bombs into the building before shooting fleeing worshippers. nL5E8FT05E

“President Goodluck Jonathan condemns the murderous terrorist attack on the Bayero University Campus in Kano yesterday and the brutal killing of innocent worshippers at the University by vicious assailants,” a presidency statement said.

Jonathan has been criticized by Nigerians and foreign diplomats for failing to get a grip on the sect’s wave of violence, which has gained momentum since his presidential election victory a year ago.

Most of Boko Haram’s attacks focus on authority figures it believes have wronged the group by arresting or killing its members.

Nigeria’s more than 160 million population is split roughly equally between a largely Christian south and a mostly Muslim north.