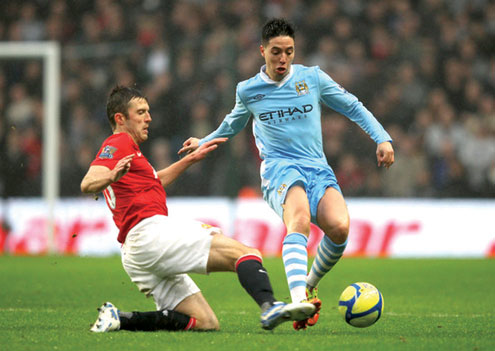 TACKLED…Samir Nasri of Manchester City (r) is challenged by Michael Carrick of Manchester United during one of their matches. Both teams clash again tonight.

The defining plot twist of the most enthralling title race in years could be written today as Manchester City attempt to seize control of their Premier League destiny against leaders Manchester United.

Three weeks ago, United already had one hand on a record 20th title after City’s defeat at Arsenal left Sir Alex Ferguson’s team a hefty eight points clear with only six games remaining.

But a poor run of results from United, which has seen them take only four points from a possible nine, has suddenly given City the chance to put themselves back on pole position as the finish line looms.

An estimated worldwide television audience of more than 650 million is expected to tune in for a match that is being hyped as the biggest in Premier League history.

“This is the derby of all derbies,” Ferguson said. “It’s in the blood of the supporters and I know lots of fans who would give everything to win this game,” the United manager added.

“People are speaking of this as being the biggest game in Premier League history and it’s a massive game to play in,” Barry said.

“I don’t think you can get away from the size of the game against United and the pressure.”

The equation for City is simple: a victory tonight would see them return to the top of the table.

Wins at Newcastle and at home to Queens Park Rangers would then guarantee City the title, provided United are unable to make up their rivals’ significant advantage in goal difference, which currently stands at plus six.

City manager Roberto Mancini has attempted to douse the expectation level by stating that United will remain favourites for the title even if they lose, citing the champions’ final two matches against Swansea and Sunderland.

“I think they have more chance than us because we play the derby today, after we play against Newcastle, that will be a very tough game,” Mancini said.

“Instead United play Swansea and Sunderland. For them, they will be two easy games.”

Ferguson meanwhile is relishing the challenge from opponents he views as the biggest threat to United’s position at the summit of the English game owing to the club’s seemingly limitless wealth.

United have already demonstrated that they have the know-how to get a result at a ground where City have dropped just two points all season, winning January’s FA Cup third round tie 3-2.

Yet Ferguson must be concerned by the sudden frailty of a United defence that was punctured repeatedly by Everton last weekend in a 4-4 draw.

City, who humiliated United 6-1 at Old Trafford in October, have rattled in 12 goals in their past three games, and their nimble strikeforce of Sergio Aguero and Carlos Tevez will fancy their chances of adding to that haul if Rio Ferdinand and Jonny Evans have another off-day.