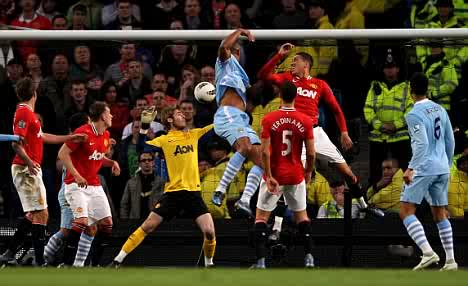 Vincent Kompany called on Manchester City to finish the job in the race for the Barclays Premier League title after scoring the winner in a famous 1-0 victory over Manchester United Monday night.

The Belgium international’s first-half header was enough to send City to the top on goal difference from United with only two games remaining.

Victory at Newcastle on Sunday, followed by another at home to QPR on the final day will, barring a mathematical miracle, be enough to secure the Blues their first title since 1968.

Kompany said City’s players are now on the brink of realising their childhood dreams, but called for focus for the remainder of the season.

Asked about his emotions after completed a famous league double over United, Kompany said: ‘Absolutely buzzing. We’ve been waiting for this moment.

‘It’s far from over and we know that, but to give our fans two wins over United this season, we have to finish it off and we have to do it over the next two games.’

The euphoric City skipper added on Sky Sports: ‘Someone texted me today and said he thought I was going to score the goal, and I thought he was a lunatic!

‘For us to get this result, we wanted it so bad.

‘It all comes down to the dream we had when we were children, and we all want it so much.’