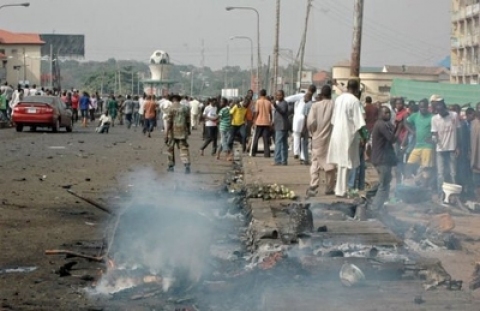 Gunmen armed with explosives killed at least 34 people in Yobe State, Northeastern Nigeria, when they attacked a cattle market and burned it to the ground, residents and officials said Thursday.

The attack Wednesday night in the city of Potiskum was said to be in reprisal for an incident earlier in the day, when a gang sought to rob the market but were fought off by traders who caught one of the attackers, police said.

The man who was caught was doused in petrol and a tyre was placed around his neck before he was burnt to death, according to police and residents.

“They threw explosives and shot indiscriminately, setting fire to the market, killing lots of livestock and wounding many people, mostly cattle dealers.”

Police have not provided a death toll, but an emergency official said on condition of anonymity that 34 bodies were brought to a local hospital and some 22 other people were being treated for injuries.

He added that the toll was likely to be more than 50 because families were also burying relatives’ bodies without bringing them to the hospital.

Residents described a terrifying scene at the market usually crowded with traders, with scores of cattle burnt, the market razed and dozens of people killed. Vehicles were also said to have been burnt.

One resident said firefighters were at the scene on Thursday morning searching water wells out of fears that residents had fallen in and drowned while trying to flee.

Residents crowded a local hospital to determine if their relatives were among the dead.

“The whole market has been burnt down,” a resident said.

“Roasted remains of cattle litter the whole place … The ground has been scorched. Firefighters have arrived at the market trying to go into open wells to bring out bodies of people that fell in while trying to flee the attackers.”

Islamist group Boko Haram has carried out scores of attacks in northeastern Nigeria, including in Potiskum, located in Yobe State, but criminal groups have also committed violence under the guise of the group.

Gangs often seek to provoke panic at markets, forcing crowds to flee so they can steal. At cattle markets, particularly in Nigeria’s northeast, gangs target livestock dealers since they tend to have large amounts of cash on them.