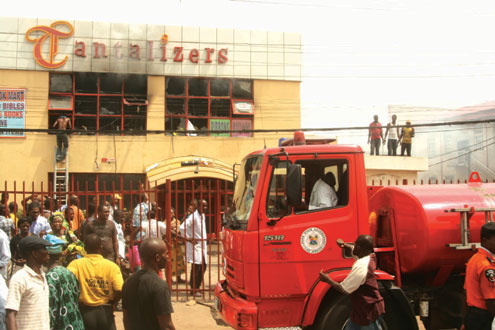 •Men of the Lagos State Fire Service trying to put out the fire that gutted the Ogba Ijaiye branch of Tantalizers, a fast food outlet this morning. Photo:Oluwasanmi JOSEPH.

The Ogba outlet of the fast food giant, Tantalizers Confectioneries was gutted by fire this morning.
But the cause of the fire outbreak could not be ascertained yet.

Our correspondent, who witnessed the fire outbreak, gathered that if not for the timely intervention of street urchins, popularly known as area boys, the entire building would have be razed.

Sources at the scene of the incident disclosed that they were just walking by when they saw fire engulf the building.

Attempts to speak with the management of the outfit proved abortive as they were not willing to comment on the cause of the fire, which destroyed some goods.

A source, who craved anonymity, informed our correspondent that when the areaboys saw the fire fighters coming after the fire had been put out, they threatened to beat up the fire fighters but it took the intervention of men of the Nigeria Police Force, NPF from Area G command to restore normalcy.