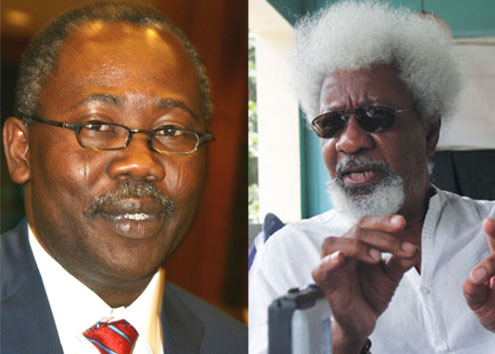 The Attorney General of the Federation and Minister of Justice, Mr. Mohammed Bello Adoke (SAN), has begged activists to shelve the plan to go on strike if those named in the N1.7 trillion subsidy fraud are not prosecuted.

Nobel Laureate, Professor Wole Soyinka and other activists had called on Nigerians to prepare for another strike if the Federal Government failed to bring those involved in the scam to book. The government was given a two-week ultimatum to do so.

However, on Thursday Adoke pleaded for time, adding that prosecution of those found to have benefited from the fuel subsidy scam would not be based on the report of the House of Representatives but on findings by anti-corruption agencies after carrying out a thorough investigation.

In a statement issued in Abuja, Nigeria’s capital, the Minister of Justice also stated that government is yet to receive the fuel subsidy probe report of the House of Representatives.

In the statement, Adoke said that government would prosecute anyone found to have violated the law in the course of fuel subsidy transactions but however stated the prosecution will not be based on the findings of the Adhoc Committee of the House of Representatives which conducted public hearing into the N1.7 trillion subsidy fraud, but on findings by the Economic and Financial Crimes Commission, EFCC, and other agencies.

According to the Justice Minister, “Experience has shown that whenever our law enforcement agencies are stampeded to arraign suspects, the end result is usually the discharge of such suspects by the courts ostensibly for want of evidence. Nigerians must therefore allow our law enforcement agencies to conduct painstaking investigations that will ultimately satisfy the standard of proof required in criminal cases.”

The Minister stated that the exercise carried out by the House of Representatives is mainly a fact-finding one and could not be relied upon to prosecute those who were found to have soiled their hands in the scam.

“I also wish to point out that the Report of the Ad-Hoc Committee and the Resolutions adopted by the House of Representatives is yet to be transmitted to the Executive arm of government. Nevertheless, when the report and accompanying resolutions are received, the relevant law enforcement and anti-corruption agencies will commence the tedious process of sieving through the report, with a view to assembling all the essential ingredients required to sustain criminal charges that may be filed as a result of such investigations,” he added.

Mr. Adoke appealed to members of the civil society who had threatened to embark on protest to persuade government to prosecute those indicted by the probe report to exercise patience and allow anti-corruption agencies to carry out independent investigation.

He assured that government would be guided by the dictates of the rule of law and due process as required of any democratically elected and responsible government.

“In this regard, the need to ensure that thorough investigations are carried out by relevant law enforcement agencies cannot be overemphasized,” he added.

He urged Nigerians to have faith in the processes being undertaken and to patiently wait for the outcome of the investigations and subsequent prosecutions that might flow from the fuel subsidy probe conducted by the House of Representatives and the on-going probe by the Senate.

“I wish to observe that the ultimatum being given by some groups and the threat to embark on demonstrations and strike actions will only compound the problem and divert attention, as well as the energy that would otherwise have been channelled into productive use by law enforcement agencies,” he further stated.

The minister also said that as part of government’s commitment to eliminate waste in government spending, other processes had been put in place to enhance accountability and transparency in the oil sector even before the commencement of fuel subsidy probe.