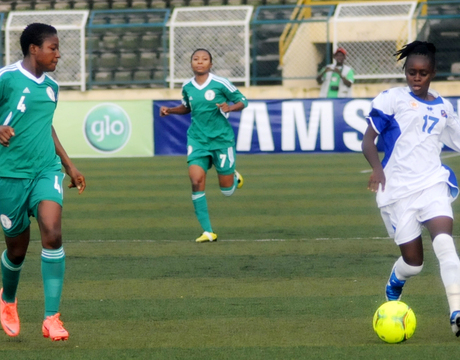 Nigeria’s chances of featuring at the forthcoming FIFA Female World Cup in August,  brightened as the Super Falconets defeated their Democratic Republic of Congo counterpart by 4-0.

The match which was the 3rd round,  African qualifier of the FIFA U-29 Women World Cup, was played at the MKO Abiola International Stadium,  Abeokuta.

Nigeriad scoring in the 36th minute through skipper Gloria Ofoegbu while Fransisca Ordega made it two in the 52nd minute.The third and fourth goals were scored by Ebere Orji and Ofoegbu  in the 56th  and 84th minutes respectively.The second leg would be played in Kinshasha in a forthnight.

Edwin Head Coach of the Falconets, who spoke to reporters after the match, expressed satisfaction at the performance of his team.He assured that the team would repeat the feat during  the second leg.