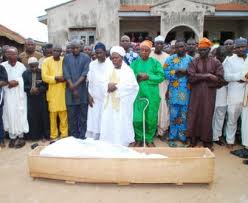 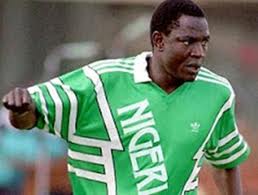 The remains of 1993 Africa Footballer of the Year, Rasheed Yekini, were buried in his home town Ira, Oyun Local Government Area of Kwara State, amid tears by relations, team mates and well wishers.

The ex-international, 48, who died on Friday was buried according to Muslim rites at 4 p.m. The Chief Imam of Ira, Alhaji Shehu Tijani, who led the prayer before the burial, noted that death is the end of everyone.

The burial was witnessed by a large crowd of soccer fans from across the country.

Yekini, who died in a private hospital in Ibadan at about 10 p.m. on Friday, was brought to Ira at about 2 p.m. on Saturday for burial.

Present at the burial was the Kwara State Commissioner for Information and Communication, Prince Tunji Moronfoye, who pledged that government would do something to assist the deceased’s family.

Others were representatives of Osun State Governor, Mr Rauf Aregbesola, Commissioner for Sports, Mr Stephen Kola Balogun who said the news of his death was received with shock.The Osun State Government  donated N1 million as endowment fund for the soccer legend to cater for the family and children.

The Commissioner for Sports, Oyo state, Mr Dapo Lam Adeshina who represented Gov. Abiola Ajumobi said Yekini’s death was a great loss.According to him, the country has not rewarded him for his contribution to national soccer development because he scored the first Nigeria world cup goal in 1994 in the U.S.

In his reaction the Kwara State Governor, Alhaji Abdulfatah Ahmed, said he received the news of the death of the soccer icon with great shock and disbelief.Ahmed noted that the deceased would be missed at a time when his experience was needed to move Nigerian football to the next level. “On behalf of myself, my family and the good people of Kwara I condole with the family and the sporting world on his demise”, Ahmed added.

The traditional ruler of Ira, Alhaji Abdullahi Oyetoro urged the government to always come to the assistance of the sports heroes to encourage the young ones.

Yekini’s mother, Sikirat Yekini, thanked his friends and government for their assistance.She said her son had been sick and withdrew to himself about five years ago, adding that they spent all they had to take care of him before his death.

President Goodluck Jonathan in a statement signed by his Special Adviser, Reuben Abati, described Yekini’s death as untimely and unfortunate and noted that Nigeria would forever remember his superlative performances, especially at the African Cup of Nations in Tunisia in 1994 and the World Cup in the United States in 1994.

“It was a delight watching his fast-paced, goal-bound moves at international football competitions as he was feared by goalkeepers and defenders alike,” the President recalled, adding that Yekini also “epitomised patriotism, discipline, hardwork, commitment and humility.

“President Jonathan, while expressing regret over Yekini’s death urged his family, fans and Nigerians to continue to cherish the memories of the highpoints of Yekini’s career. He also commiserated with Yekini’s family, the government and people of Kwara State and all football enthusiasts, and prayed God Almighty to grant the bereaved the fortitude to bear the painful loss and peace to the soul of one of Nigeria’s most prolific footballers.”

NFF President Aminu Maigari was also shocked when he heard of Yekini’s demise. “What did you say? That Rashidi Yekini has died? How did he die? Oh, this is very, very sad,” Maigari said, praying that God grants him eternal rest.