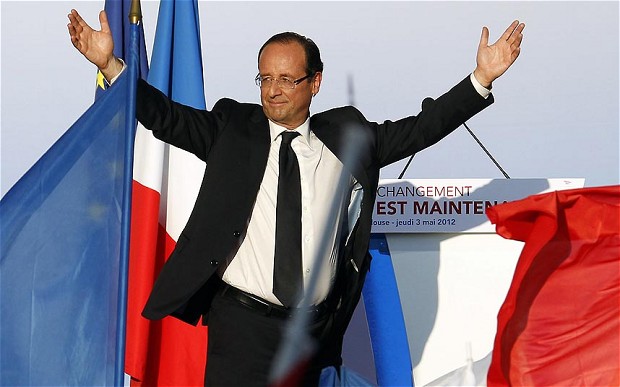 The result will have major implications for Europe as it struggles to emerge from a financial crisis and for France, the eurozone’s second-largest economy and a nuclear-armed permanent member of the UN Security Council.

Hollande won the vote with about 52 percent, according to several estimates from polling firms based on ballot samples, becoming France’s first Socialist president since Francois Mitterrand left office in 1995.

He wasted no time in pushing his agenda, telling a crowd of cheering supporters that “France chose change” and warning fellow European leaders that he would move ahead with his vow to refocus EU fiscal efforts on growth.

“I am sure that when the result was announced, in many European countries there was relief, hope and the notion that finally austerity can no longer be the only option,” he told a crowd in his adopted hometown of Tulle.

“And this is the mission that is now mine — to give the European project a dimension of growth, employment, prosperity, in short, a future,” he said.

“This is what I will say as soon as possible to our European partners and first of all to Germany… We are not just any country on the planet, just any nation in the world, we are France.”

Sarkozy had earlier conceded defeat and signalled that he intends to step back from frontline politics.

“The French people have made their choice… Francois Hollande is president of France and he must be respected,” the outgoing leader told an emotional crowd of supporters, adding that he had wished his successor well.

“In this new era, I will remain one of you, but my place will no longer be the same. My engagement with the life of my country will now be different,” he told supporters.

Sarkozy stopped short of confirming his retirement, but leaders in his right-wing UMP party told AFP that he had told them he would not lead them into June’s parliamentary elections.

“We are rid of a poison that was blighting our society. A normal president! It gives us a lot to dream about,” said Didier Stephan, a 70-year-old artist among throngs celebrating at Paris’s Place de la Bastille.

Hollande led in opinion polls throughout the campaign and won the April 22 first round with 28.6 percent to Sarkozy’s 27.2 percent — making the right-winger the first-ever incumbent to lose in the first round.

Grey skies and rain showers greeted voters across much of France, but turnout was high, with pollsters saying more than 80 percent of the 46 million eligible voters had cast ballots.

Official results were coming in, with the interior ministry saying that with 78 percent of votes counted at 1945 GMT Hollande was ahead with 51.1 percent.

The election was marked by fears over European Union-imposed austerity and globalisation, and Hollande has said his first foreign meeting will be with German Chancellor Angela Merkel — the key driver of EU budget policy.

The 57-year-old Socialist has vowed to renegotiate the hard-fought fiscal austerity pact signed by EU leaders in March to make it focus more on growth.

Hollande appeared to be winning over European leaders quickly on Sunday, with some capitals already echoing his call for growth measures.

“We will work together on a growth pact,” German Foreign Minister Guido Westerwelle told reporters in Berlin. “I am confident the Franco-German friendship will be further deepened.”

On the domestic front, Hollande has said he will move quickly to implement his traditionally Socialist tax-and-spend programme, which calls for boosting taxes on the rich, increasing state spending and hiring 60,000 teachers.

Sarkozy fought a fierce campaign, saying a victory for Hollande would spark market panic and financial chaos and calling him a “liar” and “slanderer” in the final days of the race.

But Sarkozy failed to overcome deep-rooted anger at meagre economic growth and increasing joblessness, and disappointment after he failed to live up to the promises of his 2007 election.

Sarkozy, 57, was also deeply unpopular on a personal level, with many voters turned off by his flashy “bling bling” lifestyle — exemplified by his marriage to former supermodel Carla Bruni — and aggressive behaviour.

Hollande has vowed to be a “normal president” in contrast with Sarkozy, but some have raised concerns over his lack of experience.

Hollande, a long-time Socialist party leader and lawmaker from the central Correze region, has never held a top government post.

The first round of the election last month saw a record score for Marine Le Pen of the far-right, anti-immigrant and anti-Europe National Front, when she took nearly 18 percent of the vote.

Sarkozy turned increasingly to the right ahead of the run-off — vowing to restrict immigration and “defend French values” — but Le Pen refused to call on her supporters to back him and she cast a blank ballot.

Hollande won the backing of centrist Francois Bayrou, who took nine percent in the first round, and Communist-backed Jean-Luc Melenchon of the Left Front, who took 11 percent.

Hollande is expected to be sworn in by May 15 and after seeing Merkel will quickly set off for a series of international meetings, including a G8 summit in the US on May 18-19 and NATO gathering in Chicago on May 20-21.

The Socialists, Sarkozy’s right-wing UMP and France’s other political parties will now be focused on a parliamentary election to be held over two rounds on June 10 and June 17.

Chancellor Angela Merkel phoned Francois Hollande to congratulate him on his victory in France’s presidential vote and invited him to come to Berlin as soon as possible, her spokesman said Sunday.

“The chancellor invited the French president-elect Hollande to come to Berlin as soon as possible after his inauguration,” Merkel’s spokesman Steffen Seibert said in a short statement following a phone call between the pair.

“Both agreed how important close Franco-German relations were and assured each other that they would strive for good and trusting cooperation,” Seibert added.

The statement gave no date for a possible meeting of the two, but Hollande’s inauguration is expected to be around May 15.

Hollande’s campaign manager Pierre Moscovici had said earlier that France’s new leader would take up the invitation “quickly after his inauguration”.

“The Prime Minister called President-Elect Hollande this evening and congratulated him on his victory,” said a spokesman from Cameron’s Downing Street office in a statement.

“They both look forward to working very closely together in the future and building on the very close relationship that already exists between the UK and France,” it added.