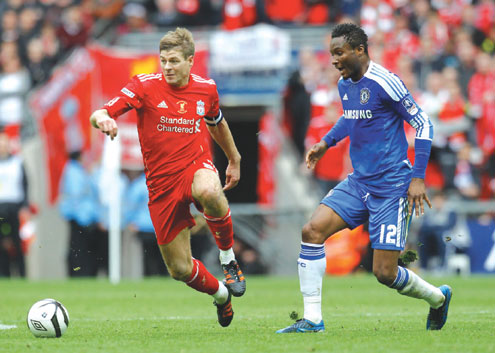 For the second year in succession, the FA Cup finalists meet again in an English Premier League tie just three days after clashing at Wembley.

Last year, Manchester City rubbed salt in Stoke’s wounds by beating the Potters 3-0 in a Premier League fixture, having lifted the cup, thanks to Yaya Toure’s strike the previous weekend.

Roberto Di Matteo’s cup-winning Chelsea side will hope to emulate City tonight. A second win against Liverpool would be a major boost to their hopes of claiming a top-four finish.

The Blues’ chances of securing Champions League football through their league position have been undermined by their patchy away form. They have claimed just seven points from the last 24 available on their travels, making the loss to Newcastle at Stamford Bridge last week especially costly.

In contrast, Liverpool’s home form has been their Achilles heel. Their total of five Anfield wins is their poorest tally in the top flight since 1949. Their cup exploits have meant criticism has been relatively muted but the Kop will expect better from Kenny Dalglish’s side next term.

The Mail reports that Liverpool may choose to rest some of the players involved in Saturday’s FA Cup final defeat. Midfielders, Charlie Adam and Lucas, have been ruled out for the rest of the season with knee injuries.

Chelsea duo, John Obi Mikel and Raul Meireles, both miss the game after picking up injuries.

The game may come too soon for defenders, Gary Cahill and David Luiz, both of whom are nursing hamstring injuries.

Chelsea have failed to score in five of their last eight Premier League games against Liverpool.

The cup final defeat was Kenny Dalglish’s first loss as Liverpool manager against Chelsea in 14 matches.

The Reds have won five home league games this season. Unless they beat Chelsea they will equal their lowest number of home wins in a top-flight season set in 1948-49.

Their only home victory in the Premier League in 2012 was the 3-0 win against Everton on 13 March.

Kenny Dalglish’s side have alternated between defeat and victory in their last four league games.

The Blues have conceded nine of their last 10 league goals in the final 15 minutes of matches.

They have only won one of their previous eight away games .

Their only victory in that run was the 4-2 win at Aston Villa on 31 March.