We Are To Blame For Yekini's Death —Ikuforiji 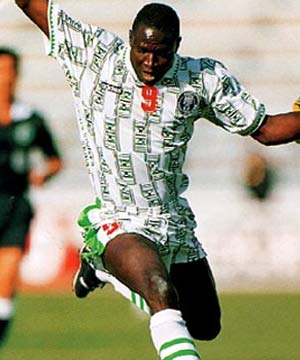 Speaker of the Lagos State House of Assembly, Adeyemi Ikuforiji, has said that he and his colleagues should be blamed for the death of Nigerian striker, Rashidi Yekini, rather than blame the Federal Government.

According to him, even the lawmakers shared part of the blame for waiting till his death before bringing up his predicament before the House.

Ikuforiji told his colleagues at the plenary on Monday to stop attacking the Federal Government at every opportunity, asking them what roles they personally played in the life of the late Yekini.

A member of the House, Babatunde Ayeni, had drawn the attention of his colleagues to the demise of the footballer under Matter of Urgent Public Importance.

Ayeni, who is the Chairman of the House Committee on Youth, Sports and Social Development, lamented that while the late Super Eagles striker was alive, he was abandoned by the country he served meritoriously, but that the country’s leaders were now flooding the society with condolence messages and describing him glowingly.

The lawmaker recalled that the former African Footballer of the Year made the country proud by scoring Nigeria’s first goal at the World Cup in the United States of America in 1994.

He reminded his colleagues of a report which he said was carried in a national daily last year concerning the poor state of health of the Yekini.

Ayeni said despite the report, the Federal Government and other tiers of government failed to respond in order to change his situation.

His colleagues took turn to praise the late striker and slam the Federal Government as well as the football associations for abandoning those who added value to the nation and instead concentrating on preparing overbloated budgets where corrupt tendencies came to play.

Another lawmaker, Omowunmi Olatunji-Edet described the place Yekini was buried as an eyesore, saying though she was not a star, she would not want to pass through such experience when she passes on.

While reacting to their arguments, Ikuforiji said disagreed with them for blaming the Federal Government.

“We are most times unreasonably sentimental and we keep bombarding and blasting and blaming the Federal Government for everything in this country, but nobody is willing to correct the anomalies.

“We have so much degenerated in our thinking to the extent that when your child misbehaves or when he is not growing up properly, the blame goes to the government of the day.

“For God’s sake, the Federal, State and Local Governments cannot do it all.

“We have lost the sense of communalism and we don’t even believe in ourselves these days to the extent that if your wife misbehaves, you would want the government to take care of her,” he said while accusing some of his colleagues for waiting till the death of Yekini before raising issues about him even though they knew he had been sick.

“If you felt so passionate about his contributions, why couldn’t a member of this House come to the floor and encourage other members to contribute even a portion of our income towards taking care of people like Rashidi Yekini?

“We can’t go on the way we are, even though I’m not saying the government shouldn’t do what it was supposed to do, but we want a situation where the government would even help us unzip our trousers when we want to wee-wee and this is sad.

“Rashidi would not have died if those who now pretend to be holier-than-thou had souls that were living and had done something about it instead of coming today to start blaming the Federal Government which itself is no longer what it had been.

“My verdict is that: we are guilty and this is the truth,” Ikuforiji continued while stressing that it would be a mere waste of time to discuss the Federal Government when those at that level paid deaf ears to such issues.