Seedorf at 36 still passionate about soccer 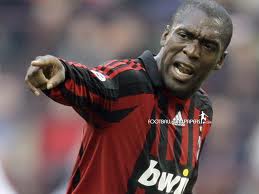 Dutchman, Clarence Seedorf, 36, is out of contract with AC Milan this summer. FIFA.com beams the searchlight on the Dutch veteran has been bringing his powerful physique to bear in midfield contests for more than 20 years now, and yet he remains something of a mystery.

The AC Milan veteran has never craved the spotlight, though, preferring to focus on his tireless efforts at the heart of the sides he has represented. He is, above all, a hard-working team player with a gift for breaking up play as well as instigating moves, blessed with a powerful shot that can often make the difference.

Nicknamed Il Professore by the Milan faithful, Seedorf has never forgotten his roots. Born in Paramaribo in Suriname, his grandfather Frederick was the son of a slave liberated by his German master, from whom he took the surname, Seedorf. Clarence himself started out in the game at the Ajax youth academy, and since then he has racked up a long list of winner’s medals at some of the most prestigious clubs in Europe.

It would take several pages, maybe even several books, to do full justice to Seedorf’s two decades in the game, but FIFA.com now invites you to learn a little more about this incredible athlete with the aid of a few facts and figures.

0 – Clarence Seedorf has never once been shown a red card, despite making 801 club appearances in all competitions. In fact, the Dutchman has only picked up 15 yellow cards during his career, including six in 29 games this season.
1 – The number of FIFA World Cup™ final tournaments he has graced. He was present at France 1998 as Guus Hiddink’s side reached the semi-finals, but missed out in 2002 after the Netherlands finished behind Portugal and the Republic of Ireland in qualifying. Not on the best of terms with then coach Marco van Basten, he was subsequently left out of the squad for Germany 2006, before making his international return on 15 November 2006. He finally ended his Oranje playing days after turning down the chance to travel to UEFA EURO 2008, having collected 87 caps between 1994 and 2008.

5 – The number of clubs the Dutchman has represented in 21 seasons as a professional. He has won a total of 20 trophies with Ajax, Real Madrid and AC Milan, but failed to pick up silverware during his spells with Sampdoria and Inter Milan.

6 – The number of trophies he won in three seasons and 82 matches for the club where he made his start, Ajax. He also helped himself to 11 goals in that time.

21 – The number of goals he scored in three-and-a-half years with Real Madrid. Fabio Capello made him a linchpin of the side that took the La Liga title in 1996/97 and he triumphed in the Champions League under Jupp Heynckes the following season.

93 – The number of games he contested for Inter during his two-and-a-half years at the club. Hector Cuper, Marcello Lippi and Marco Tardelli made the most of his versatility to use him in a number of different positions, without ever settling on one.

123 – The total number of goals he has scored in his career to date, an excellent haul for a complete midfielder who allies remarkable technique with physical strength and powerful, precise shooting ability from distance.

431 – The number of matches he has disputed for I Rossoneri in all competitions. He has made more appearances for the side than any other foreign player, bettering the previous landmark of 394 set by legendary Swedish midfielder Nils Liedholm. Seedorf has earned himself a place in the club’s pantheon, despite arriving to general indifference from Inter in an exchange deal with Francesco Coco. Operating alongside Andrea Pirlo and Gennaro Gattuso in midfield, he played a major role in securing two Champions League titles, a FIFA Club World Cup, two Serie A crowns, a Coppa Italia and four Italian Super Cups.

300 – Out of contract at the end of this season, Seedorf reached the 300-game mark with Milan in Italy’s top flight when he appeared against Novara on 13 May. At 36 years of age, the Dutchman remains as passionate about the game as ever.