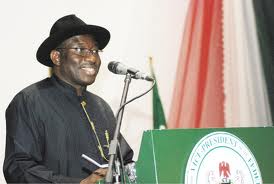 President Goodluck Jonathan has said Nigeria would take necessary steps to ensure the exploitation of hydro-carbon resources along its border with Cameroun.

President Jonathan was speaking to Mr. Ahmadou Ali, Vice Premier of the Republic of Cameroun, who brought a special message to State House, Monday.

He said, “we shall consider these proposals you have brought, and thereafter call a meeting to discuss relevant issues that will enable Nigeria and Cameroun to start exploitation of the hydro-carbon resources along our border.”

President Jonathan expressed appreciation to President Paul Biya of Cameroun for signing the trans-border security agreement and cooperating with Nigeria in the fight against terrorism, and advised regional alertness, to check the spread of terrorism.

The President said Nigeria would continue to lead the regional effort against terrorism, adding that continued cooperation and collaboration among contiguous nations will help check the menace.

Earlier, the Camerounian Vice Premier, Mr. Ahmadou Ali, had presented his country’s counter-proposals to Nigeria on the exploitation of the hydro-carbon resources along the border, stating that the border demarcation in accordance with the judgment of the International Court of Justice was almost complete.

He expressed President Biya’s deep sympathy to Nigeria for the terrorist attacks in the country, and assured President Jonathan that Cameroun would support all efforts to check the menace.