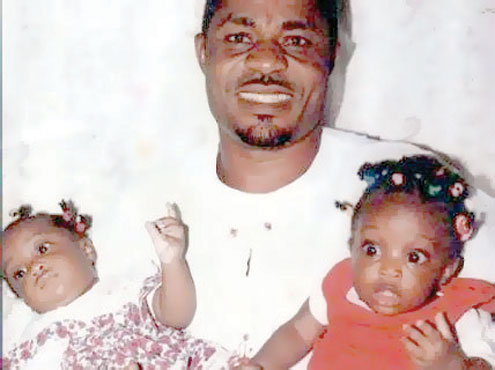 •Samuel Eleng with the twins

Bishop David Oyedepo’s Faith Tabernacle, also known as Winners’ Chapel, is currently enmeshed in a controversy over a missing two-year old baby, whose name has been given as Praise.

Samuel Eleng and his wife, Favour, said their daughter disappeared at the children’s department of the church located in Sango-Ota, Ogun State, Southwest Nigeria about a year ago and that since then, the self acclaimed Bishop and his church had been doing everything possible to hide the matter from the public.

Mr. Eleng explained that the sad experience brought about by the missing child began on 17 April, 2011, which happened to be an Easter Sunday.

According to him, when the family got to the church, the couple handed Praise and her twin sister, Glory, over to the school teachers under whose custody many other children were kept.

He said the teachers gave them two tags as proof that their children were at the department for that day.

However, after the church service, the parents went back for their kid only to discover that Praise had gone missing from the class and that the teachers under whose care the children were kept were said to have gone inside the church at that period when parents came back to pick their kids.

“I saw my wife around the vicinity of the Children’s Section, she was crying. She told me that Praise was missing,” Mr. Eleng explained, adding that they eventually got hold of one of the four teachers allegedly in charge of the children’s class, and that the said teacher was also confused regarding Praise’s whereabouts.

“She claimed not to know but advised us to check other classes. So we started moving around from class to class, around the church premises,” he said further, stressing that after the futile search, he and his wife became apprehensive but still hopeful and that they waited until after most people had gone home before reporting the issue to Oyedepo, who the couple said prayed and joined them in the search after he had told them that he did not see “any evil signal in the disappearance of the little girl.”

Since then, the couple said, the family had continued to look for their child and according to Samuel, “I was thinking so many things; how can I come to the house of God and my child will suddenly disappear? Even if it was time for rapture, how can it just pick my child only?”

He said the case was later reported at the Police Area Command in Onipanu, Sango-Ota in Ogun State by the church’s Chief Security Officer, Supol Cosmas, and that Ijeoma Lawal was assigned as the Investigating Police Officer, IPO.

However, an unconfirmed report claimed that the four teachers connected with the case were never interrogated or asked to make statements.

When it appeared the police were not making any success at finding Praise, the parents decided to go public with the photographs of the missing girl and that he went to a television station (name withheld) where he was interviewed

He however said during the announcement, the station made some misrepresentation of facts and that when he called, he was told by Desmond that the church told them that the child got missing at the family home and not the church.

“Even the IPO called me to say that she watched the broadcast and was shocked at what was reported.

“…Is it a sin for me to go to a church of God with my family? This is a year since my child disappeared under the church’s custody.

“…How can the church interfere with police investigation?” he asked.

He said he had made several attempts to get the four teachers interrogated to no avail, adding that in August last year, the police told him the church called and asked that the case be withdrawn as the little girl had been found, but that this was not true.

Provoked by the shoddy handling of the issue, Mr. Eleng said he went to the church to make some trouble and that right from then, Bishop Oyedepo stopped picking his calls.

He said he again met Oyedepo on 12 April, 2012, almost a year after Praise went missing and that after reminding him that his daughter had not been found, the Bishop told him to be prayerful for God to strengthen him so the child could be found. When our correspondent contacted the Divisional Police Oofficer, DPO, of Onipanu station at Ota, called Jide on phone this morning, he directed him to the Ogun State Police Public Relations Officer, PPRO, ASP Muyiwa Adejobi.

Adejobi confirmed the incident and gave an assurance that the matter will not be swept under the carpet.

It is true, there was a case like that being handled by a unit of the station called Juvenile and Women Centre (JWC).

“The DPO confirmed that his men are in Lagos looking for a suspect in the case. It is a case we may not be able to finish within a day or two. We will continue to monitor our men investigating the matter now that we have been fully briefed. The family should exercise patience. We understand their feelings. I can assure them that we will get to the root of the matter.”

The police spokesman further assured the family of the command’s readiness to assist get to the root of the matter.

If the family are not feeling comfortable with the way the police in Onipanu are handling the matter, you as a journalist can help them by giving them our numbers so they can get across to us. The DPO too will now step up action to ensure that the matter is accelerated,” he added.

One of the pastors of the church who spoke with our correspondent under anonymity disclosed that the case of the missing child and some matters going on in the church have forced many of the pastors to either resign or step aside.

He said: “my brother, I don’t want any problem with my life. As it is now, I will soon leave the church. Crises upon crisis all the time. Are we the only church in Nigeria? Daddy has lost grip of that place, that I can confirm but who are we to talk?

“There are some cabals as we have in the government circle who are not faithful and sincere with the Lord. Sooner or later, the wheat will be separated from the chaff. I pity Mr Samuel, the father of the missing girl. How on earth can you explain that your child is missing? It is a taboo in Yorubaland. A proverb says, ‘my child is dead is better than my child is missing.’ All our efforts to let Daddy see the implications of some of these issues, always proved abortive as the cabals will never allow him to either see you or listen to you.”

Another pastor in the church, identified as Pastor Dare, when contacted on phone this morning, declined to comment and simply said, “I don’t know anything about the matter and please don’t drag me into it, thanks.”

The presiding Bishop of the church, Bishop David Oyedepo was recently sued for N2 billion by one of the female members for allegedly assaulting her. The matter is still pending at the Ogun State High Court in Abeokuta.