Akinmade: Why Mimiko will be re-elected 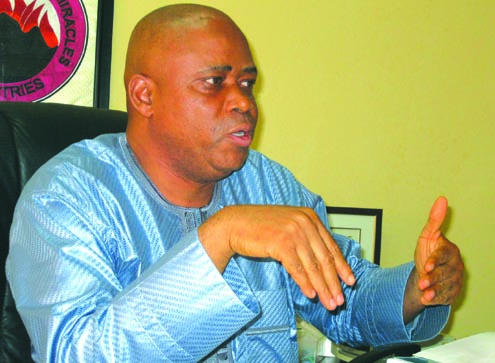 Why Gov Mimiko Will Be Re-Elected

Q: What are the challenges associated with disseminating information about the Mimiko government?

The challenges are similar to those that a media practitioner faces everyday. And life itself is a challenge and we pray that everyday we are able to surmount the challenges that come our way. Be that as it may, I’ll like to stress that Iam happy to be working with a performing governor, who is loved by his people, who sets agenda and fulfils the promises he makes. I’m happy to work with somebody that is sellable. If you are working with someone that is not sellable, it will be difficult for you to propose creative media plans that will project the image of the government.
Mr. Governor himself assists us in a very big way because of the way he has positioned his government. He has set certain standards and agenda for his government. We are excited to be working with him and I pray that God would strengthen him the more.
If you look back, will you say that the people have something to be happy about in the past three years?
What has made my job easy is the fact that the people are excited. The character of a government would be determined, plus or minus, between seven months and one year. You can determine whether or not that administration is loved by the people. If you go out there, you’ll see how deeply appreciative people are about what the governor is doing. The way people are showering encomium on him shows that he is performing. He has not disconnected from the people.
The problem we had in the past was that most people in government, after some time, got disconnected from the people. But Governor Mimiko is so refreshingly different and the people are happy with him. We thank God that our healthcare delivery system is of very high standard. In education, we’ve taken the lead. You will recall that recently one of our pupils recorded nine A1s in WASCE. It’s unprecedented. Our value system is now being enhanced. People in Ondo State now have a mantra: ise l’ogun ise (work is the antidote to poverty). In Ondo State, you can now move around without molestation because there is peace. Our governor made that possible.

How does your ministry receive feedbacks from the people?
When you look at the way we work (thank God we had some training in the media), we value feedback from the people. And the feedbacks are very positive. There is a radio station in the state that devotes its energy to trying to put this government down. But Ondo State people are very enlightened, they are educated. They will look at things critically before making up their minds. They’ve discovered that radio to be high on propaganda. There was a day the radio station said the fountain here caused flooding at NEPA, about 3 or 4 kilometres away. People ran to the place and found out that there was no flood! There was a time they reported that four Ondo State officials working with this government had been arrested by the EFCC when, in fact, those fellows were in the comfort of their homes. They are deliberately spreading falsehood, but they have been found out by our people.
We get feedback by connecting to the people. We’ve connected to the people because of some of the programmes we have initiated. You will recall that when this administration came on board, it sent some change agents (some young graduates, trained by this administration) to all the communities.
Why did government approach development of rural areas from bottom-up and not from top-down?
It’s an ideological decision, because we belong to Labour Party. We believe the people made Labour Party, therefore our intervention should affect the downtrodden more than the elite. Education has been one of our major priorities in Ondo state. We are trying to train the coming generation, so they can take the baton from us and take the state to an enviable height. We want the world to see that Africans have heads on their shoulders and can think. We want this to start from Ondo state and that’s what this government is doing. If you look at our intervention in the markets, like the governor explained the other time, we used bottom-top approach. Instead of just sending those market women away, like some state governments, we took their data with their photographs and everything. They didn’t know what we intended to do with the data.
Before we relocated them from where they were selling stuff, we built world class markets for them. You know, rich men, wives of commissioners, chairmen of local governments, businessmen and others demanded for shop allocations. But the governor said no. He asked for the list of the traders. The shops were allocated to those who were trading on the streets. It’s an ideological thing. We want to positively affect the lives of the downtrodden. In the process, we are building a nation, a society and our state.

Going into the election which is months away, why should the people of Ondo keep faith with the Mimiko government?

The people of Ondo will continue to keep faith with Governor Mimiko because he is fulfilling promises he made to the masses. He promised to work for the people of Ondo state, that their joy would be his joy, and their sorrow his sorrow. In creating an enabling environment for them to work, he vowed that he wouldn’t mind stepping on toes. And he swore with the Holy Bible that he would work for them. He has been doing all that. His Midas touch is evident in many areas of our lives-in education, environment, urban renewal, agriculture etc. What we have seen in Ondo is great. I can refer to Governor Mimiko as God-send, because we need this kind of intervention in our democracy. We need somebody to come up with programmes that will have direct impact on the life of the common man.
Now he has been able to demonstrate to the whole world that it is no rocket science to embark on health care delivery programme. We have been able to place cost on a pregnant woman from conception to delivery. And you marvel that it’s less than N6,000! When you cut off middlemen, the cost is reduced considerably. For example, a drug that should have been sold for N20 or N40 will be sold for N100 when middlemen are involved and that’s because contractors are involved. What we are doing now is to buy directly from the manufacturers and in the process, we have been able to save a lot of money. In our hospitals now, we’ve delivered over 11,000 babies and about 2,000 caesarean operations free of charge. It’s an ideological issue.
Talking about health, some people believe that every man should take care of himself and his family. But the governor believes that government should use healthcare to affect the lives of people positively and that’s what we are doing. We are certain that come 20 October, our people will demonstrate their love, passion and commitment to this administration by re-electing Governor Olusegun Mimiko. Labour Party is the overwhelming choice of our people and the governor’s mandate will be renewed.