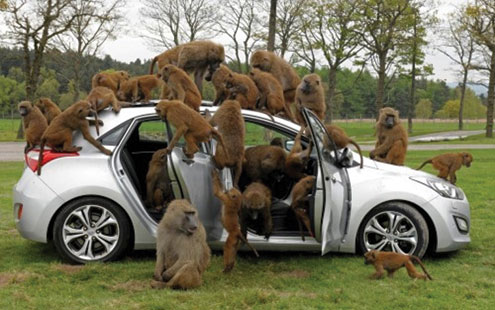 They press all the buttons, try to open the windows, then drop their lunch down every crevice in the upholstery. So what better way to test the durability of a brand new hatchback than to leave it at the mercy of a troop of cheeky little monkeys?

It was definitely a case of monkeying around when the clever folk at Hyundai UK decided to put the new i30 up to a very different type of wear and tear challenge – in the first endurance test of its kind in the UK by a car manufacturer, cheeky safari park baboons were let loose on the hatchback.

Baboons from Knowsley Safari Park on the outskirts of Liverpool were the volunteers, chosen for their well-known love of tearing park visitors’ cars apart – Wayne Rooney will certainly remember them well; his vehicle was subject to their scrutiny when he visited the Merseyside attraction last year. An i30 was parked in the baboon enclosure, and was immediately besieged by dozens of the park’s primates. The monkeys simulated the punishment a typical family might subject a car to: jumping up and down on seats, pushing and prodding buttons and opening and closing storage bins.

They even checked the durability of cupholders with plastic drinking beakers. Meanwhile, other baboons tested the fabric of seats by eating their lunch in the car, and some played with their toys in the i30’s sizeable boot. Outside, the paintwork was smeared and scraped, but the hard-wearing paint protected the car from significant scratches and chips.

Ten hours later, playtime was called to an end, and the car – specially-designed for families and their ‘little monkeys’ in the back – emerged virtually unscathed. Seems the extra strong materials used to build the interior, easy wipe plastics and tough fittings held up to the abuse.

“For a baboon, to have a car to play with for a whole day is manna from heaven,” said David Ross, the GM at Knowsley. “I’ve seen thousands of cars pass through this enclosure, get mobbed by monkeys, and none have lasted the distance as well as this Hyundai.”

“These baboons are incredibly inquisitive. If you put them on any car they will scour it for the weak points and find any faults. At one point there were 40 monkeys in the car, pushing it to its limits – that’s ten times the size of the average human family.”

Well, now that the baboon car has come about, I wonder if any other manufacturer will attempt to ape the feat. Maybe use some lions? Elephants? Have a whale of a time?