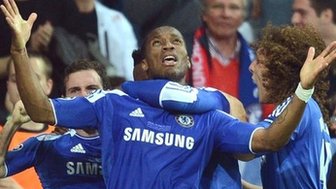 Chelsea’s Didier Drogba may be now out of contract, but he proved to be the match-winner yet again as the Blues lifted their first Champions League title to make amends for his misery in Moscow.

Four years after being red-carded in the 2008 Champions League final defeat, the 34-year-old produced a man-of-the-match performance against Bayern Munich and his final spot-kick on Saturday sealed Chelsea’s 4-3 penalty shoot-out win.

After Bayern took the lead in the second-half, it was Drogba who kept the Blues in the game as he rose highest to convert Juan Mata’s corner and equalise against Bayern two minutes from time as the game finished 1-1 after extra time.

Having also netted the winner in the 2-1 victory over Liverpool in the FA Cup final a fortnight ago, Drogba flirted with the villain’s role four minutes into extra time as his foul on Franck Ribery saw Bayern awarded a penalty.

With the entire stadium holding their collective breath, Bayern’s ex-Chelsea wing Arjen Robben could only weakly hit to Petr Cech’s right and his shot was quickly gathered by the grateful goalkeeper.

Drogba worked tirelessly throughout, often back-tracking to help out in defence and grew in stature as the game wore on before keeping his cool to nail the final penalty past Munich’s Manuel Neuer to give Chelsea the title.

Having joined the Blues from Marseille in 2004, the Ivory Coast forward has said he will sit down with Chelsea’s bosses to discuss a new deal once the season is over.

It was the towering striker who helped put the Blues in Saturday’s final with the first-leg winner at Stamford Bridge against Barcelona in the last four.

Against the odds, Drogba and the rest of Chelsea’s collection of aging stars reached the final with victories over Napoli, Benfica and Barcelona in the knockout rounds.

If the former African Player of the Year has played his last game for the Blues, the possibility of Drogba available as a free agent is likely to arouse interest across Europe, but he has denied reports linking him to Barcelona.

Having been sent off four years ago, Drogba made good on his pre-match promise to make amends for his Moscow misery by ending Chelsea’s long wait to be crowned kings of Europe.

Drogba’s dismissal in the rain-soaked Russian capital four years ago came late in extra-time when he slapped United defender Nemanja Vidic after a mass confrontation between players from both teams.

With Drogba unable to take a penalty in the shoot-out, the Ivory Coast striker had to watch from the sidelines as John Terry and Nicolas Anelka’s spot-kick misses gifted the trophy to United.