Night of misery for Bayern Munich 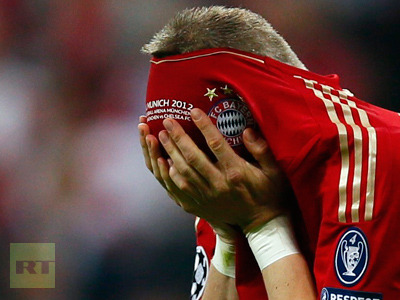 Bayern Munich’s Champions League dream final turned into a nightmare on Saturday as Chelsea ruined their homecoming party to leave the German giants trophy-less for the second season in a row.

Chelsea’s 4-3 victory on penalties at the Allianz Arena, after the match finished 1-1 following extra time, ended Bayern’s dreams of a fifth European title and their first Champions League crown since 2001.

The Bavarian giants have now lost two of the last three Champions League finals following their 2-0 defeat at the hands of Jose Mourinho-coached Inter Milan in Madrid in 2010.

Having been hammered 5-2 by Dortmund in the German Cup final at Berlin’s Olympic Stadium the previous Saturday, Bayern’s stars again collected losers medals as their dream final in Munich ended in tatters.

Since it was announced two years ago that Bayern’s Allianz Arena would host the 2012 final, the Bavarians have dreamed of lifting the trophy ‘dahoam’ – meaning at home in the Bavarian dialect.

Having already conceded this season’s German league and cup titles to Borussia Dortmund, defeat to Chelsea means this is the first time since the 1995/96 campaign Bayern have failed to win any titles in back-to-back seasons.

“If you don’t win anything at Bayern Munich, that is not a good season,” admitted Bayern’s Germany captain Philipp Lahm.

Bayern’s domination of German football looks to be under serious threat by Dortmund as Jurgen Klopp’s team have won the last two Bundesliga campaigns.

They have also beaten Munich on all of their last five meetings dating back to February 2010.

Bayern blew their bid to become both the first team since Inter Milan at San Siro in 1965 to be crowned European champions at home and the first club to lift the Champions League title at home.

The Bavarians have just two days now to pick themselves up before their friendly against World Cup finalists Holland back here at the Allianz Arena on Tuesday in a pre-Euro 2012 warm-up match for the Dutch.

The match was arranged as part of a compensation deal for Bayern after Dutch winger Arjen Robben returned from the 2010 World Cup with a hamstring injury which kept him out of football until early 2011.