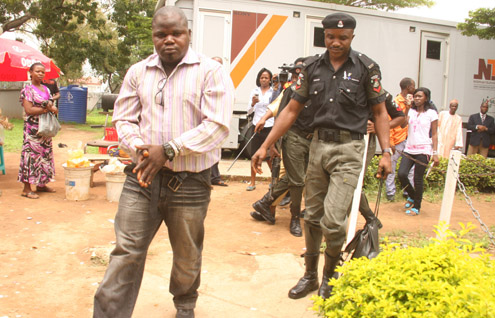 A man, whose name was given as John Akpapu, was Monday morning caught with several grenades in a bag at the Radio House located in Central Area of Abuja, the nation’s Federal Capital Territory.

He was caught by security guards at the gate of the building where Radio Nigeria is located, while a ministerial press briefing by two of the country’s ministers was going on.

P.M.NEWS correspondent at the scene of the incident learnt that Akpapu, who hid the grenades in a bag he was carrying, wanted to gain entrance into the building but was stopped for a search by security guards who handed him over to men of the anti-bomb squad following the discovery of the grenades.

Immediately information about Akpapu’s arrest went round the building, participants at the press briefing were said to have scanpered to safety and only returned when they were sure the situation had been brought under control.

“The Minister of Education, Rukayyatu Rufai and her Youths and Sports counterpart, Bolaji Abdullahi, were to present government’s stewardship at the building.

“The people had gathered and the sports minister had started with the briefing when the incident happened,” a source at the scene of the incident said.

When asked why he wanted to carry out an attack, Akpapu said he had become tired of the country which is facing many challenges adding that he willingly volunteered to blow up himself because of the frustration he had experienced.