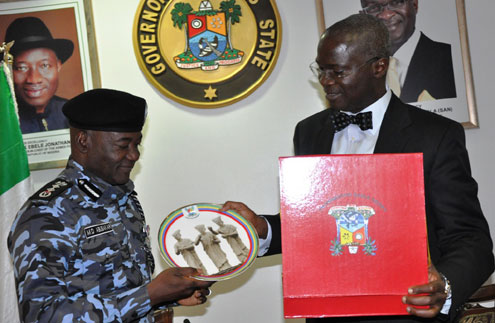 Lagos State Governor, Mr. Babatunde Fashola SAN (right), presenting a souvenir to the Inspector-General of Police, Mr. Mohammed Dahiru Abubakar (left) during a courtesy visit to the Governor at the State House, Ikeja, Lagos on Monday, May 21, 2012.

Lagos State Governor, Mr. Babatunde Fashola (SAN), Monday called on security agencies in the country to pay more attention to minor social vices as a means to stem the escalation of violent crimes in the society.

Governor Fashola, who spoke at the Lagos House, Ikeja, while playing host to the Acting Inspector General of Police, Mr. Mohammed Dahiru Abubakar, said the failure to deal with such crimes as rape, abuse of drugs, abuse of women and children, assault and others was responsible for the escalation of such violent crimes as kidnapping, armed robbery, terrorism and the like.

He told the police boss: “I want the police to pay more attention. We are dealing with very high crime but we are omitting the small broken-window-glass crimes, those ones that threaten the very fabric of society and erode it much more fundamentally.

The Governor added: “We must, therefore, go back to enforcing compliance to traffic rules, prosecuting substance abuse, abuse of alcohol and others because it is from these small ones that the big and violent ones develop.”

Governor Fashola, who said the whole issue of crime stems from non-compliance to the rule of law and order, pointed out that when people imbibe the impression that they could rape, indulge in drug abuse, drive against traffic and such other infringments and get away with it, they eventually graduate to higher and more serious crimes.

According to the governor, “it ranges from our behaviour, our attitude to the enforcement of law, to voluntary compliance with laws such as road traffic regulations, trading, building houses, our relationship with one another and every undertaking that we carry out as well as situations where people think that laws can be broken and they can appeal later,” adding that those things must stop.

Governor Fashola also reiterated his call for State Police, saying the time to decentralise the Nigeria Police Force has come so that the Federal Police would be complemented by the State Police in order to ensure effectiveness.

“For me, it is a thing nobody should argue about anymore. We have only to put safety measures in place to prevent abuse. If we continue with what we have done for over 50 years and we expect a different result, it won’t work,” the governor said.

He noted that intrinsic to the idea of a central police as obtained in the country currently, is the fact that there was once a regional police and somebody had the courage at that time to make a change seeing that it was not working well.

“We must find the courage now to say that this thing is not working. We need to create that partnership between the Federal and the State Governments in terms of policing. I believe these are the reforms that history has placed at your doorsteps,” Governor Fashola told the visiting Police IG.

Describing the Acting IGP as innovative, brilliant and courageous, Governor Fashola recalled that the police boss took over in Lagos as Commissioner of Police at a time the state had very high rate of violent crimes, adding that because of his innovativeness and courage as well as the cooperation of the citizens, a foundation was laid for a sustainable solution.

“It will take the efforts of the whole country to overcome the challenge of violent crime, but we are coming out of the woods gradually and progressively and, I believe, Nigeria will climb out of the woods as you assume office again at this time,” the governor told Mohammed.

Commending the Police Command in the state for their efforts at maintaining security in the state, Governor Fashola noted that without regards to the odds and difficulties against them, the level of their welfare and remunerations as well as work environment, they have worked to ensure safety for Lagosians.

“In spite of the odds, in spite of the difficulties, in spite of the fact that your welfare and your remunerations, your work environment and your offices could be a lot better, you have kept faith with the people of Lagos. In the rain and in the sun, at night and during the day, as difficult as your work environment has been, as limitedly as the remunerations you have received are, you have not abandoned your profession, your commitment to defend people, to ensure that citizens can sleep,” the governor said.

Earlier, in his remarks, the Acting Inspector General of Police thanked the governor for his tremendous assistance to the police in the execution of their assignment, pointing out that if every other state in the country would do like Lagos State, the security challenges facing the country would be a thing of the past.

The Police boss, who recalled his sojourn in Lagos as Commissioner of Police, told Governor Fashola, “because you are committed and care for your people security wise, you have gone out of your way to support the police. Nigeria will be a lot safer if all the other states of the federation can do like you.”

He said road blocks would never return on Nigerian roads again as, according to him, “they are damaging our reputation,” adding that in order to beef up police patrol across the country, he has ordered the purchase of additional 300 patrol vehicles.

Declaring the days of police harassment of citizens as over, the IGP pledged that he would build a police force that would protect, defend and respect the rights of Nigerians especially the aged, adding that emphasis would be laid on training and retraining of officers and men of the police to ensure dignity and efficiency.

He promised to do his best to reform the police, saying “whatever is bad will go. I will ensure qualitative service, zero tolerance for corruption. Lagos is the hub of this country; if Lagos fails, Nigeria will fail and Lagos will never fail.”

Also present at the occasion were the Chief of Staff, Mr. Lanre Babalola, Secretary to the State Government, Mrs. Oluranti Adebule, Attorney General and Commissioner for Justice, Mr. Ade Ipaiye, his Environment and Special Duties counterparts, Mr. Tunji Bello and Dr. Wale Ahmed among other members of the State Executive Council, top ranking police officers from Lagos and Ogun States, including the Lagos State Commissioner of Police, Mr. Umar Manko and his Deputy, Mr. Tunde Sobulo as well as other top government functionaries.