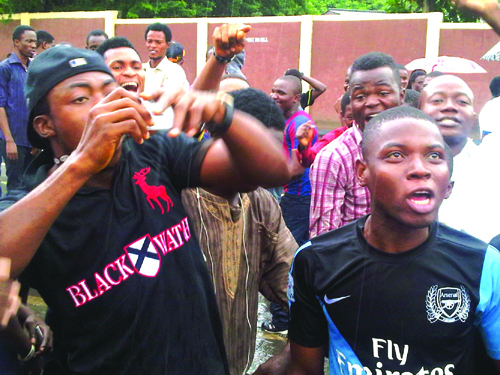 The University of Lagos, Akoka, southwest Nigeria, was this morning shut for two weeks by the authorities of the institution following protests by the students against President Goodluck Jonathan’s decision to rename the institution after the late icon of democracy, Moshood Kashimawo Abiola.

The closure is to allow normalcy to be restored in the university after the students took to the streets again today following yesterday’s protest.

As at the time of filing this report, the aggrieved students had barricaded all roads leading to the main campus, thereby paralysing academic and business activities on and around the campus. The main entrance of the institution was also under lock and key.

The protesting students also blocked some parts of the Third Mainland Bridge.

Policemen have been drafted to the campus gate to ensure the protest did not turn out to be violent.

Speaking with P.M.NEWS at the scene of the protest this morning, Ugbegbe Osamudiamen, a 200-level student of Economics, said the protest will continue until President Jonathan listens to their yearning.

“If Jonathan knows that he is truly democratically elected President of Nigeria, he should have a rethink and leave this institution as Unilag. There are other ways he can honour MKO even on this campus, not changing the name of the school entirely,” Ogbegbe said.

Other students who spoke to P.M.NEWS also opined that the Unilag Sports Complex, Senate building and some hostels could have been named after MKO.

“The President can even build another good hostel and name it after MKO, nobody will protest, but this decision he has made is a misplaced priority,”” another student, Adeleke Yemi noted.

During his Democracy Day speech yesterday, the president had said that the institution will now be called Moshood Abiola University, but the decision was promptly greeted by stiff opposition from the students, lecturers and other staff of Unilag who took to the streets in large numbers to show their grievances.

The protest started from hostels in the school before hundreds of the students gathered and proceeded to the streets, where they caused stampede at the ever busy Ikorodu Road and its environs yesterday.

The students described the president’s decision as an unpopular one, stressing that out of the numerous lapses facing his government, renaming Unilag is an unnecessary development.

“Well, we are not against the fact that he is trying to immortalise Abiola, what we are saying is that there are other popular ways he could have done that. Besides, we smell foul play because it is very obvious that Mr. President is simply doing this in a bit to get sympathy support from Southwest people for his second term bid. But this will only make things worse,” a student who identified himself as Jide Adeyinka said.

The protesting students, who vowed not to relent until President Jonathan reverts his decision reiterated that the decision shouldn’t have even come at this time when the institution is still mourning its late Vice Chancellor, Professor Babatunde Shofoluwe.

A senior lecturer of the institution who craved anonymity told our reporter that “it is unfortunate. There is a need for the president to have a rethink, though we have told the students to be calm.”

The institution’s alumni association has also rejected the unlawful name change. The association’s National President, Professor Olayide Abass, and the National Secretary, Femi Oladimeji, in a joint statement published in a national daily today rejected the name, describing it as inappropriate.

“The University of Lagos is the first University to be established by an Act of Federal Parliament in 1962 and has built a strong brand name in its 50 years. That is why it is the University of first choice and the nation’s pride. We expect that any change in name should have taken stakeholders’ interest into consideration and followed due process. We are aware that neither the Governing Council nor the University Senate nor any other stakeholder was consulted before the change was announced.

“Did Abiola himself not say ‘you cannot shave a man’s head in his absence?’

“Without prejudice to the person of the late Chief MKO Abiola, we the Alumni Association on behalf of the entire University Community reject the name as announced.”

The university’s Chairman of the Academic Staff Union of Universities, ASUU, Dr. Karo Ogbinaka said today that the decision is undemocratic.

“We are behind our students in this protest. It is a pity that Jonathan wants to destroy one of the best brands of universities in Africa. We won’t accept that name,” he said. Prof. Akinfeleye described the name change as a political miscalculation, while the Civil Liberties Organisation, CLO, said Jonathan’s action was an abuse of power.