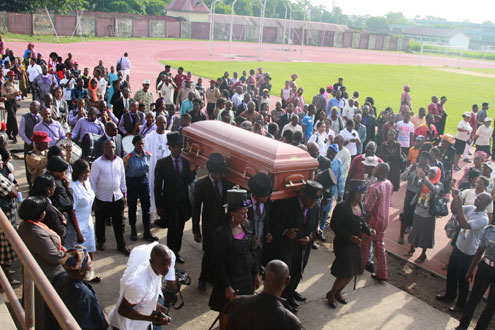 •The remains of the late Sofoluwe at All Saints Church, Montgomery, Yaba, before burial this afternoon. PHOTO: ABEEB OGUNBADEJO.

Before the burial, there was lying in state at the Unilag Sports Centre, Akoka, where students and dignitaries paid their last respects to the deceased.

At the time of going to press, his body in a brown MIC Casket was being taken to his final resting place by youth corps members for a private burial.

Prof. Adetokunbo Sofoluwe died on 12 May, 2012. He was the 10th Vice Chancellor of the institution.