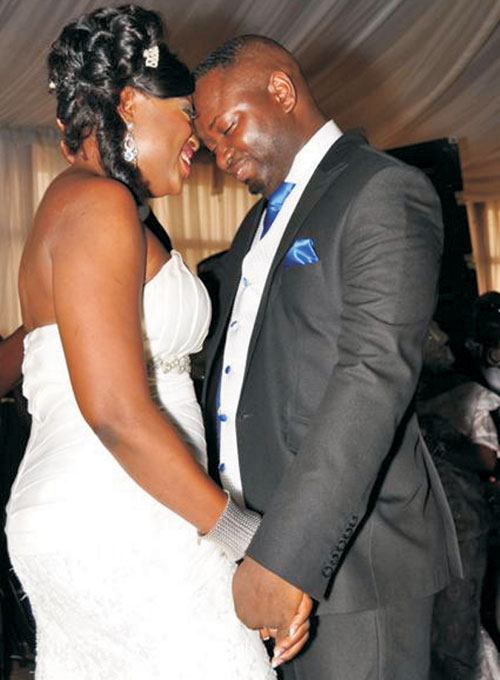 The Saturday, 26 May, 2012 wedding of Nollywood star actress, Funke Akindele, will stand as a red-letter event in the Lagos social diary.

The star-spangled gathering was a 3-in-1 ceremony, opening with the traditional engagement which began at noon after the arrival of the groom, Kehinde Adeola Oloyede, in a new Mercedes Benz E Class car.

But the arrival of the bride, Funke, in a new Audi Q SUV with her close friends in tow, set the wedding in motion. As the two love birds were finally joined as husband and wife the traditional way, Funke’s mother couldn’t help but shed tears of joy, and was comforted by actress, Ireti Osayemi.

Wait a minute! Not many are aware that Funke’s bridal gown took just three days to sew from design to finishing.

P.M.Entertainment learnt that Funke, had on Monday 21 May, 2012 put a call to Ohimai Atafo, famed designer and owner of Weddings By Mai, to help design her bridal gown. Though shocked with such impromptu order, Atafo, within three days, delivered to the actress a sleeveless wedding dress that the designer has already tagged ‘Beau Jenifa’ named after Funke.

Between Halima Abubakar And Grace Amah

Controversial actress, Halima Abubakar and Grace Amah, were never known to be so close until their joint appearance at Funke’s wedding last Saturday. The two actresses, who arrived the venue together, stuck to each other like leeches. They moved around the tables together and when their choices of meal were sought by the waiter, they both ordered the same meal and drinks. It got to a point that many eyebrows were raised over this new found love between the actresses.

Apart from most of the Glo ambassadors that stormed the wedding to identify with one of their own, some top officials of the telecoms giant, Globacom, were in attendance. The company’s team was led by Bode Opeseitan, Femi Opadere, Fela King and Jumobi Mofe Damijo, who doubled as a senior friend to Funke. The former AIT On-Air-Personality and wife of Richard Mofe Damijo, Delta State Commissioner for Tourism and Culture, was on her feet all through the nearly 10-hour extravaganza. Apart from wearing the Aso-Ebi of Silver and Wine sequined lace, she brought and distributed designer footwear to some guests.

Super Stars On The Special Platform

The last time a rich list of A-list actors and actresses converged under a marquee in a day was last year August wedding of Nollywood belle, Mercy Johnson. But the classy nuptials of Funke Akindele brought them together in quantum. Some actors and actresses had the privilege of sitting at a special platform created to host the super guests. At this special arena were Genevieve Nnaji, Ini Edo, Rita Dominic, Chioma Akpotha, Omoni Oboli, Ali Baba, Desmond Elliot, AY Makun and Femi Brainard among others.

Not very far from the platform were the MNet’s hit soap Tinsel crew of Victor Olaotan, Kunle Coker and Matilda Obaseki. They were really treated to bottles of Moet n Chadon with gray-haired Olaotan stylishly sipping the vintage champagne like his billionaire Fred Ade-Williams character in the soap opera.

With Love From ANTP

Though Funke, the bride, is a cross over actress, she remains a very strong member of the Yoruba speaking-dominated Association of Nigerian Theatre Arts Practitioner, ANTP. And members of the association were fully represented and they partook in the Aso Ebi spectacle. While the male wore the white dry lace, the female actresses adorned the silver and wine sequined lace.

The conspicuous absence of veteran actor, Adebayo Salami, a.k.a. Oga Bello, and his children especially actor son, Femi, was a topic of interest among numerous guests who know of the close relationship between the bride and the family.

At a gathering that had the crème de la crème of the Nigerian movie industry in attendance, it beggars belief that the family was not represented.

Funke and Femi, in the past had a symbiotic relationship that saw the duo acting as partners in series of movies. This artistic chemistry fuelled speculations that the two must be lovebirds.