No survivor as Dana plane Crashes in Lagos 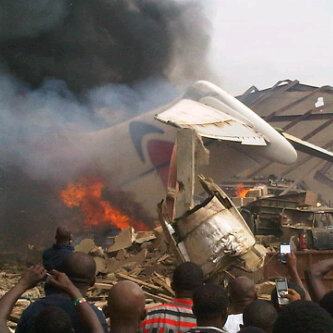 A Dana Airline passenger plane, carrying 153 passengers, including 6 crew members has crashed into a residential suburb of Nigeria’s commercial capital of Lagos. Officials said there were no survivors.

Residents of Toyin area of Ishaga where the accident occurred said the plane hit the ground with a loud bang as it crashed into some houses and a warehouse stocked with educational books.

A huge crowd gathered at the scene and it is taking rescuers serious efforts to put out the fire caused by the crash.

Residents of the area are also assisting men of the State Fire service in putting out the fire as at the time of this report.

The plane, an MD-83, with registration 5N-RAM was initially owned by Alaskan Airlines and was built 22 years ago.

The crash happened at about 3 p.m Nigerian time.

There are no survivors as at the time of this report.

“It was a Dana (airline) flight out of (the capital) Abuja to Lagos with about 153 people on board,” Harold Demuren said. “I don’t believe there are any survivors.”

Lagos State police spokesman Joseph Jaiyeoba told AFP the plane went down in the Iju neighbourhood on the mainland of the city, where most of the city’s population is concentrated. The crash happened near the airport.

A spokesman for Nigerian airline Dana confirmed one of its planes had crashed but could not immediately provide further details.

“I can confirm that one of our planes crashed today on the outskirts of Lagos,” Tony Usidamen told AFP.

“We lost communication with the aircraft. We are going to issue an official statement.”

It was also not clear how many victims were hit on the ground.

Firefighters and the police were said to have arrived at the accident scene. A large crowd also gathered at the scene.

Aviation minister, Princess Stella Oodua told the News Agency of Nigeria (NAN) that she was saddened by the news and was already on her way to the crash site.

“I am extremely saddened by the news of the crash and I assure the nation that investigations are underway,’’ she told NAN.

Dana uses exclusively MD-83 planes, according to an online aviation portal, Aviation in Nigeria. Four of them came from Alaska Airline and one is ex-Avianca Airline. Their average age is 20 years.