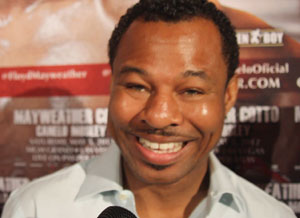 “Sugar” Shane Mosley announced Monday that he was hanging up the gloves after an illustrious 19-year career that will likely earn him a place in the International Boxing Hall of Fame.

A month after losing to junior middleweight titlist, Saul Alvarez, by unanimous decision, the 40-year-old said he was going to concentrate on training his son, 21-year-old amateur Shane Mosley Jr., and promoting.

“It was a hell of a career. I’m happy for all the great memories and all the great fighters that I fought. Now it’s time to give back. I’m ready to train my son full-time now.”

Mosley won five world titles across three different weight titles and was never knocked out in his career, posting a 46-8-1 record.

He said he knew it was time to retire after being manhandled by the 21-year-old Alvarez on 5 May in Las Vegas.