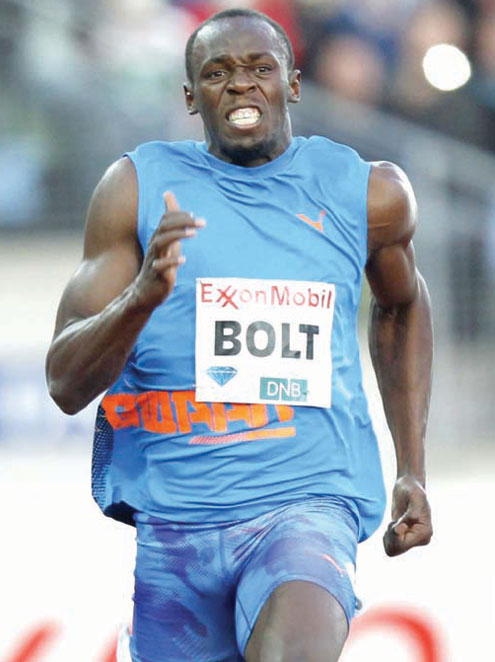 Usain Bolt will travel back to Jamaica for Olympic trials on the back of a nail-biting victory over compatriot, Asafa Powell, in the 100m at the Oslo Diamond League meet on Thursday.

The 25-year-old reigning double Olympic sprint champion left it late in the race to reel in Powell, the former world record holder.

Teeth gritted and long legs pumping, Bolt screamed through the finish line in 9.79 seconds with Powell notching up his 77th sub-10sec 100m in 9.85sec but also left wondering what he has to do to improve on his 11-1 losing record against Bolt.

“I really enjoyed it!” beamed Bolt. “My execution was alright. I’m going home now to top things up.

“I’ll look to go fast and look forward to the trials.”

The race was delayed after Briton, Mark Lewis-Francis, false started in lane one.

But Bolt kept his nerve to produce a reasonable start, but was left trailing Powell over the first 60 metres.

It was then that Bolt pushed his huge frame through his drive phase and claimed the victory.

The performance followed his 9.76sec outing in Rome last week in warmer weather, which came after a minor blip, albeit a winning one, of 10.04sec in a cold and blustery Ostrava.

As introductions were made on the stadium big screen, Bolt danced and generally acted up for the benefit of a capacity crowd at the Bislett Stadium.

When the screams and whistles died down, Bolt, wearing bright white spikes and loose blue singlet and shorts, settled in his blocks after crossing himself, looking skywards and winking as the television zoomed in and his picture was broadcast on the big stadium screen.

The Jamaican revolutionised sprinting, and indeed athletics, four years ago in Beijing, setting world records when winning the 100 and 200m titles, and also starring in a record-breaking Jamaican quartet in the 4x100m relay.

He left the Chinese capital as one of the most recognisable figures in world sport, unbelievably going on to beat both his individual sprint marks with new times (9.58 and 19.19sec) in the Berlin worlds in 2009.