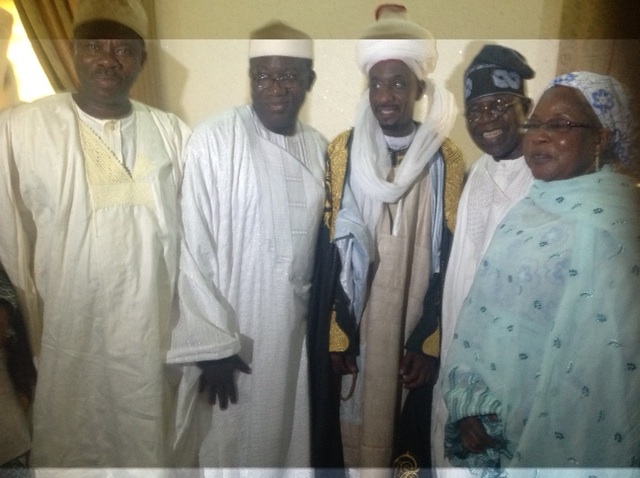 Governor of Central Bank of Nigeria, CBN, Malam Sanusi Lamido Sanusi was today turbaned the Dan Majen Kano by the Emir Alhaji Ado Bayero with big personalities in the political and business class in attendance.

The Emir, Alhaji Ado Bayero who turbaned Lamido at 10 a.m. said, “we have installed you (Dan Majen Kano) in recognition of your experience and exposure as well as your good character. We are aware of your good work not only in Nigeria but also abroad.

“We are also aware of your patriotism and cordial relationship with the people including your support to the less privileged, plus your effort at reviving the economy and urge you not to relent on your good work.”

The title of Dan Majen Kano is very historic and an inherited title by the Fulani dynasty which indicates Fulani rulership of Kano by about 500 years.

P.M.NEWS also learnt that the title Dan Majen was exclusively reserved for the royal family members right from Kano Habe dynasty and the Sullubawa dynasty. The most prominent among those who held the title under the Sullubawa dynasty was the Emir of Kano Ali Ibn Abdullahi alias Alu who reigned between 1894 and 1903.

In Kano there are different kinds of traditional (Sarauta) titles. According to history, the first category of titles is reserved for royal family members while the second is for the decedants of the jihad leaders such as the Makama, and the third category for outstanding people who served and brought great bebnefit to Kano people.

The ceremony was done amidst tight security with airforce helicipter hovering over the air.

The Kano state government was represented at the occasion by the Deputy Governor, Dr. Umar Ganduje.

The Oba of Lagos Rilwanu Akiolu and other traditional rulers were also spotted at the occasion.