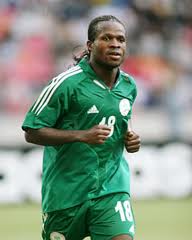 Both the the state Commissioner of Police, Mr Ikechukwu Aduba, and the chairman of the state Sports Commission, Pinick Amaju, confirmed Obodo’s freedom.

Obodo was released by the abductors who had initially requested a N30 Million ransom after frantic efforts by the Delta state Police Command. He was rescued at Enevo, a village in Isoko, Delta state.

“Christian is with me now”, said Amaju, who also doubles as the state FA chairman.

“My men carried out the operation and rescued the footballer at about 8.30 pm,” Aduba, the police commissioner said in a telephone interview with the News Agency of Nigeria.

“Obodo is alright; he is not hurt in anyway. Right now, he is with us, under police protection.”

The commissioner said that the policemen also arrested some suspects during the rescue operation.

News of the abduction of the Super Eagles and Udinese midfielder by gunmen on Saturday elicited reactions by some ex-internationals who expressed shock and disappointment over the incident.