June 12: Torrents Of Tributes For Abiola 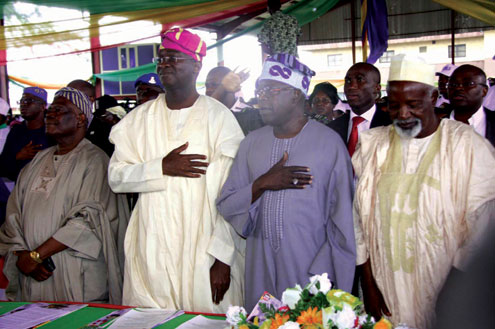 As Nigerians in the diaspora mark the 19th anniversary of the annulled June 12, 1993 presidential election, there have been torrents of tributes to the late Moshood Kashimawo Olawale Abiola, the man who clearly won what is today dubbed the most transparent election in the history of Nigeria.

Former and current state governors and other stakeholders in the country showered tributes on Abiola  at various events held across southwest states which declared today a public holiday.

They urged the federal government to give the late democracy icon a befitting posthumous honour.

Former governor of Lagos State and national leader of the Action Congress of Nigeria, ACN, Asiwaju Bola Ahmed Tinubu, suggested that renaming an institution after the late MKO is not the best way to honour a man who died prosecuting the struggle to regain the people’s mandate.

“More than anything else, we must realise that the greatest monument we can build in honour of MKO Abiola that will immortalise him is not in the hurried and tokenist naming of an institution after him as recently announced by the government, but in every Nigerian vowing never again to let our votes be stolen or our electoral rights trampled upon.

“We do not seek kingdoms for Abiola, but we seek for him what he more than deserves and earned. Chief Abiola’s victory as elected President is now a settled matter. Prof. Humphrey Nwosu, then Chairman of the National Electoral Commission (NEC), declared the result in his book published in 2008. Nothing and no one can be more authoritative than the umpire who saw it all.

“Now, the most honourable thing to do is for the government of President Goodluck Jonathan, to recognise MKO Abiola as the second duly elected executive president of the Federal Republic of Nigeria posthumously. We should accord him, even if posthumously, all the rights and privileges due to that office. The Federal Government should also apologise to Nigerians for the annulment, since it was carried out by former agents of the Nigerian state. Finally, we should declare MKO’s birthday a national public holiday, just as it has been done in the United States for Martin Luther King,” Tinubu asserted.

In his official statement, Tinubu further reminisced that today marks exactly 19 years when Nigerians put aside their different tongues, tribes and religions to vote for a man who embodied their dreams, aspirations and hope for a new Nigeria.

He said that on that day (June 12, 1993) millions of Nigerians voted for democracy in what remains the best election ever conducted in Nigeria. However, the then military dictatorship, goaded on by anti-democratic forces annulled the people’s will. Thereafter Chief Moshood Abiola, the winner of that historic election was hounded into detention and eventually died.

“The annulment of that free and fair election punctured Nigeria’s journey towards establishing a democratic society and aborted our boldest attempt at nationhood. Since then, we have had several false starts and have conducted national elections that have failed to meet the very high standard set by the 1993 election.

“June 12, no matter how hard some people try to bury it, ignore it or seek to diminish it, remains a watershed in Nigerian politics. Rather than just dwell on it, we must seize upon the spirit of June 12 to birth the Nigeria of our dream. The spirit of June 12 is that of patriotism, that of a burning desire to join hands to build a better country. June 12 was a rejection of religious and tribal politics, a demonstration of commitment to the ideals of a free society and that of a dogged spirit to vote for the best candidates,” Tinubu recounts.

The astute politician however lamented that “Today as we look back on that tumultuous yet revolutionary chapter in our journey to achieving a truly democratic society, we are forced to interrogate how Nigeria has fared. What has happened to the Nigeria of our dream? Why have our votes been repeatedly stolen and why has Nigeria failed to come up with an electoral system that guarantees every vote cast counts and protects the rights of all?  Nineteen years after Nigerians through their votes and support for Chief Abiola put our leaders on notice about the kind of nation they want, we are still unfortunately stuck in our march to a truly fair and democratic society.

“I remember those heady days of the struggle shortly after the annulment. Yes, how can I ever forget the limbs and lives lost and our freedoms and rights that were trampled upon? Today, our dream and struggle for democratisation and the establishment of a free and just society guided by the rule of law is fading away gradually. Instead of free and fair elections, we have sham elections and scientific rigging, instead  true federalism we now have creeping unilateralism, instead of an independent judiciary we have executive impunity putting our lives in danger.”

Also, the Lagos State chapter of the Action Congress of Nigeria has paid tribute to the martyr of democracy on the occasion of the 19th anniversary of the June 12, 1993 presidential election.

The party says that Abiola’s ultimate sacrifice to ensure the dawn of the present democracy in Nigeria remains a watershed that should be celebrated by every Nigerian.

In a release in Lagos, signed by the Lagos State Publicity Secretary of the ACN, Joe Igbokwe, the party said it feels that Nigeria still owes monumental debts to Chief Abiola for the solid manner he stood against the military, which ultimately led to the ouster of military rule in 1999.

It charges the federal government to name the country’s seat of power at Aso Rock after Abiola for the monumental sacrifice he paid for the present democracy in Nigeria.

“June 12 remains a metaphor of the greatly lacerated unity of the various people and sections that make up the country. We remember that on that historical election, Nigerians forsook the dividing factors of religion, tribe and tongue to vote massively for Chief MKO Abiola in an election that is yet to be rivalled in its credibility and pan-Nigerian nature of the mandate it delivered.

“We remember that despite all efforts made to ensure the type of collective national approval the annulled election wrought, the June 12 election survived to give a poignant picture of the desire of Nigerian people to live together, under a competent leadership trusted to bring about the rapid development and progress of the much abused country and her people.

“We recall how Nigerians shunned the divisive tendencies the then military government promoted to frustrate June 12 and how Nigerians stayed firm and determined to deliver an election that is still the most credible, freest and fairest in the chequered history of electioneering in Nigeria.”

As part of efforts to posthumously honour the late MKO, states such as Ogun, Lagos, Oyo and Osun have declared today, 12 June as a public holiday. The state governors in their respective commemoration speeches extolled the virtues of the man who sacrificed his life for what is being enjoyed as democracy today.

The Osun State governor, Rauf Aregbesola, also said Abiola should  be posthumously announced as the second duly elected president Nigeria, while his Ondo State counterpart, Olusegun Mimiko opined that June 12 should be regarded as the country’s Democracy Day.

The former governor of Kaduna State, Alhaji Balarabe Musa, on the occasion, urged President Goodluck Jonathan to make his gesture of immortalising Abiola, more encouraging and dignifying by immotalising him at the national level.

The elder statesman said this today at the 19 Anniversary of the June 12 Presidential Election held at the Blue Roof of the Lagos State Television ground, Ikeja, Lagos, Southwest Nigeria.

According to Balarabe Musa, “President Goodluck Jonathan’s gesture of renaming the University of Lagos, UNILAG, after Chief MKO Abiola is a nice idea but Nigerians have shown that the late business mogul is worth more than that.

“Mr President should endeavour to immortarlise the acclaimed winner of the freest and fairest election at the national level by naming a national monument after him. Mr Jonathan should make the gesture more encouraging, justifying and dignifying by removing all forms of doubt from the gesture.

“He should find a way of establishing a judicial commission of inquiry to find out the circumstances surrounding the annulment of that election and those responsible be dealt with appropriately and ensure that this does not happen again.”

Meanwhile, the Vice President, Republic of Ghana, John Dramani Mahama, will be the Special Guest of Honour and Guest Lecturer at the first anniversary of the 7th session of the Lagos State House of Assembly and the Commemoration of June 12 anniversary which takes place today.

Asiwaju Bola Tinubu was also expected as the Guest of Honour at the event scheduled to hold at the Assembly’s Chamber.