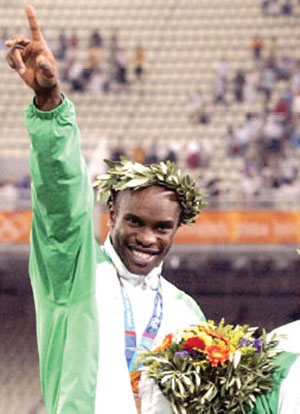 Udobong won a bronze medal for Nigeria at 2004 Olympic Games in Athens, Greece.

Two-time Olympic medalist, Enefiok Udobong has tipped Nigerian athlete to do the country proud at the 2012 Olympic Games holding in London, from 27 July to 12 August 2012.

The athletes are currently intensifying preprartion at training camps in Germany and United States of America for the summer Games.

Speaking with P.M.Sports at the Indoor Sports Hall of the National Stadium in Surulere, Lagos last weekend, Udobong, who won a gold medal in the 4x400m relay at the 2000 Olympics in Sydney as well as a bronze medal in the same event at the 2004 Olympics in Athens, said: “A lot of people have written off our athletes even before they began training for the Olympics. But I am still confident that we have some good athletes in the team who could do the country proud in London.

“I have been at the Games and I know how it feels when you are not given a chance to show how good you could perform, and this could only spur the athletes into greater heights.”

When asked to mention some of Team Nigeria’s athletes whom he thinks could spring surprises at the Games, Udobong said: “I wouldn’t want to mention names right now because I don’t want to put pressure on the athletes. But I would rather advise Nigerians to keep their fingers crossed and see what Team Nigeria would do in London.”