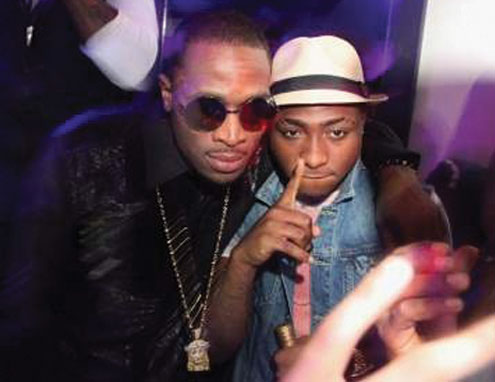 In continuation of his growing appeal on the British music scene, Nigerian and GOOD music star D’Banj will be serenading London revelers alongside new sidekick, Davido.

The two Nigerian singers will on 27 August Bank Holiday storm the HMV Apollo London in a concert already named D’Banj Live. Put together by Man Entertainment, Dbanj will be joined by Davido and his HKN gang.

D’Banj has been in the United Kingdom promoting his hit single Oliver Twist Extended Play. The Oliver Twist EP, on its first week, ended up at number 9 on the ITunes Top Singles downloaded charts.

Also fast-rising Davido has fully blown even without having dropped an album yet. With hits such as Back When, Dami Duro and the latest Ekuro, the self acclaimed Omo Baba Olowo is proving that 2012 is a fantastic year with an MTN ambassadorship as perk. He is due to drop his first album next month.

Last year, D’Banj’s new boss, Kanye West, dropped in at the Koko Concert live headlined by the Nigerian star. Already, one of D’Banj’s label mate, Big Sean, is being touted as one of the guests at the upcoming Apollo concert in August.

In a couple weeks, Cruel Summer, a movie produced by Kanye West, featuring D’Banj, will be released for the cinemas.

D’Banj Live will be hosted by DJ Abrantee.