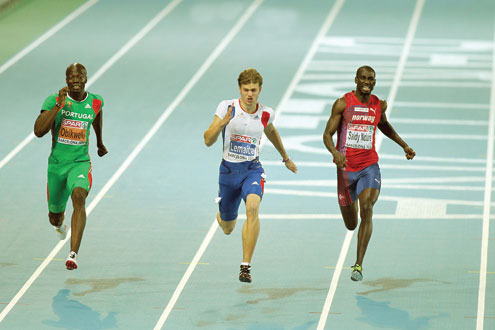 Portuguese sprinter Francis Obikwelu injured a muscle in his right leg and will be out of action for between four and six weeks, putting him in doubt for the London Olympic Games, his club said yesterday.

“Obikwelu’s participation in the London Games is dependent on the way and on how fast he recovers from the injury,” Sporting said in a statement.

Nigeria-born Obikwelu, 33, holds the European 100 meters record and clocked 9.86 seconds when he took the silver behind Justin Gatlin at the Athens Olympics in 2004.

The sprinter’s woes come after a series of injuries affecting Portugal’s high-profile athletes which have generated concerns about the chances of the country’s Olympic team winning medals in July and August.

Portugal will be without both its Beijing medalists after 2008 Olympic triathlon silver medalist Vanessa Fernandes ruled herself out and triple jump champion Nelson Evora suffered a leg injury.