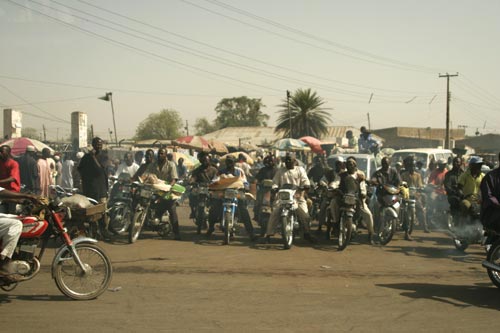 Okada riders wating for the traffic light in Kano.

The call on Alex FM radio is aimed at the residents in the overcrowded Johannesburg sprawl of shanties and houses: “Stop walking and start riding, it is time to get liberated!” It’s made by the representative of the main Indian motorcycle manufacturer which wants to flood South Africa’s townships with cheap bikes, or okada, despite there being no local culture of two-wheelers which rule the road elsewhere in Africa.

“The black South Africans who live in townships, they don’t have their own means of transport. They have to walk to a taxi rank, take a taxi and probably take another one. They spend a lot of money, and waste a lot of time.”

Since the fall of apartheid in 1994, private car use has leaped in South Africa alongside a growing black middle class with more than 50,000 new and used cars sold in May alone this year.

But the overwhelming majority of locals are forced to use the privately run mini-bus industry which has a shocking record of deadly accidents and violence.

But South Africans so far have had little exposure to bikes or else snubbed the idea.

“All over Africa, motorbikes are a means of transport. They are selling like crazy,” said Quinton Prinsloo, national sales manager at Southern African Motorcycles.

“But it is not working here. It is perceived as a toy, a luxury, it is not seen as a means of transport at the moment.”

Most of the 350,000 motorcycles registered in South Africa are for weekend use and mostly ridden by whites.

“There are some black people who own motorcycles, for instance in Soweto, but not as a means of transport for commuting,” said well-known South African crime writer and biking enthusiast Deon Meyer.

While he thinks the push by the Indian maker is a good idea, he also points out that owning a car is seen as prestigious.

“It has never been prestigious to own a motorcycle. You would be viewed as a poor, as a lesser person. In South Africa, if you own a car, you are somebody.”

Transport specialist at the Council for Scientific and Industrial Research, Mathetha Mokonyama said Bajaj’s success would depend on how they punt the bikes.

“You have to consider that bicycles, and motorbikes as well, are generally rejected — people don’t want to be seen as poor,” he told AFP.

“It depends on how they market it and how they advertise it. If they sell mobility and freedom, it could work.”

Hoping to swing a change, the company plans eight more outlets on top of the four opened in townships around Johannesburg, including a dealership in iconic Soweto.

“There is a huge potential for people who leave in the townships.”

The company is pushing the pros of the bikes, that they are light on fuel, sold with a guarantee, and are a cheap and independent travel option with a one-way taxi route from Alexandra to downtown Johannesburg costing 11 rands.

It is even offering driving lessons.

But for now, the outlet in Alexandra has only sold two bikes in two months.

“It is a start, let’s hope it picks up from here,” said manager Abu Daya.

Hoping that the poor South Africans will not fall for Bajaj sales pitch. They should learn from the experience of other Africans where the bike has become a menace and is now the preferred mode of transport for robbers and bombers.

From Reports by AFP;