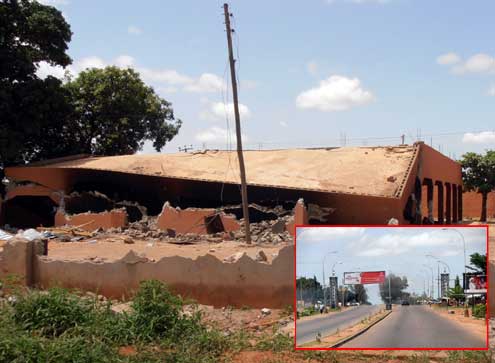 •Roadside shops vandalised by angry mob in reaction to suicide bomb attacks on the Shallom Church of God during church service on Sunday in the Trikania neighbourhood in Kaduna, northern Nigeria political capital. Inset: A road deserted following 24-hour curfew imposed by the government as a result of violent clashes. PHOTOS: AFP.

Fresh crisis erupted in Kaduna this morning as Hausa/Fulani youths in the state launched a reprisal attack on the Christian Community.

The violence followed Sunday’s bombing of three churches in the state.

The state government has again imposed a 24-hour curfew, which was relaxed yesterday after Sunday’s reprisal attacks left at least 100 persons dead.

As at the time of filing this report, over 50 Christians, including an immigration officer, have been attacked with machetes by the angry Hausa/Fulani youths.

The ciris, P.M.NEWS gathered, erupted when the Hausa/Fulani youths realised that they suffered more casualties during Sunday’s reprisal attack.

They are said to have invaded the Kaduna Central Market, shooting sporadically and attacking Christians with machetes. Scores of vehicles have also been vandalised.

The number of Christians killed in the attack could not be ascertained as at time of filing this report, but a source claimed at least about 50 are feared dead already.

P.M.NEWS gathered that helpless residents have taken refuge at the Kaduna Police Command, while policemen were seen running helter and skelter to get reinforcement.

Their initial effort to stop the Hausa/Fulani attack was futile as they complained of not having enough bullets and tear gas.

Normalcy had returned to Kaduna following the round-the-clock curfew imposed on the state on Sunday after riots broke out in different parts of the metropolis. The curfew was relaxed yesterday and today the Hausa/Fulani youths capitalised on it and unleashed mayhem on Christians.

Residents have again been forced to remain indoors while soldiers and other security personnel are patrolling the streets.

Scores were killed and more than 100 people  injured on Sunday when three churches were bombed in Kaduna and Zaria.

A worshipper said he saw a bomber drive an explosives-packed car into the church building.

The violent response by Christian youth mobs that followed the attacks was termed “a momentary breakdown of law and order,” in the police statement.

The police chief urged “criminal elements who have been carrying out campaigns of violence on innocent Nigerians and institutions to desist forthwith,” in the statement issued from Abuja.

He also said a massive deployment of forces had been ordered across “every nook and cranny of the state.”

Boko Haram has claimed responsibility for Sunday’s bombings. The terrorists have killed more than 1,000 people since mid-2009.

The Islamist group has already this month claimed two attacks that struck churches during Sunday prayers, including a suicide blast in Bauchi state that left at least 15 dead.

Meanwhile, the authorities in Yobe State have slapped a round-the-clock curfew on Damaturu as fresh gunfire rocked the restive city.

“In view of the prevailing security situation in the state capital, the governor has approved the immediate imposition of a 24-hour curfew within Damaturu metropolis,” said a government statement.

Residents reported being confined to their homes and offices due to the continuing gunfire in the Yobe State capital, which has previously been hit by Boko Haram Islamists.

The extremist group claimed suicide attacks at three churches in Kaduna state on Sunday that killed at least 16 people and sparked reprisal violence by Christian mobs who killed dozens more, burning some of their victims’ corpses.

A senior official at a Damaturu hospital told AFP that the gunfire which broke out on Monday has caused casualties, but that the streets were too dangerous for rescue workers to move around.

“We have been holed up in the hospital since yesterday. We can’t leave because it is not safe to go out. The morgue is empty now although there are dead bodies on the street,” said the official, who requested anonymity.

“Fighting is still going on in some parts of the city and the streets are totally deserted.”

Colonel Dahiru Abdussalam, commander of a military task force in Yobe State, said the latest Damaturu unrest started Monday after authorities arrested a Boko Haram suspect, prompting other members of the group to respond by setting off explosives and shooting indiscriminately.