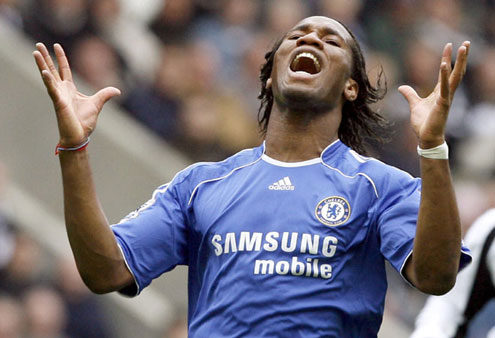 He will team up again at Shanghai with ex-Blues colleague Nicolas Anelka. Drogba, 34, said: “I considered all the offers I have received in the past few weeks, but feel Shanghai Shenhua is the right move for me at this time.”

The Ivory Coast forward’s last act in a Chelsea shirt was scoring the winning penalty in the Champions League final defeat of Bayern Munich in May.

One of his first games will be against Manchester United with Alex Ferguson’s team playing Shanghai Shenhua on 25 July as part of their pre-season tour.Drogba joined Chelsea from Marseille for £24m in the summer of 2004, becoming one of Jose Mourinho’s first signings.

He helped the Blues to win three Premier League titles, four FA Cups and two League Cups during his eight-year spell. In that time he climbed to fourth on the list of Chelsea’s all-time goalscorers with 157 and is also the club’s leading scorer in European competition with 34.

Drogba said: “I’m looking forward to a new challenge and experiencing a new culture, and am excited about developments in the Chinese Super League.

“When Chelsea went to China last year, we had a great time and I met some amazing fans.

“I hope to help promote Chinese football around the world and further improve the links between China and Africa.”