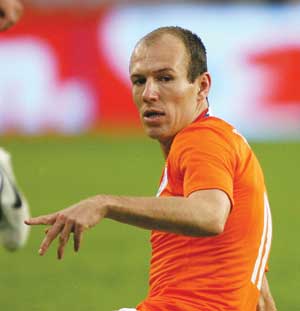 The Netherlands’ worst performance at a major tournament has undermined the standing of coach Bert van Marwijk but his Euro 2012 players are backing him despite calls from fans and the media for a fresh start.

The World Cup finalists went home after losing all three of their Group B matches – a performance so far only matched by unfenced Ireland – to Denmark, Germany and Portugal.

Their humiliated squad, who arrived in Amsterdam on Monday afternoon, are now free to follow the national discussion about what should happen to the team and Van Marwijk.

Playmaker Wesley Sneijder, set to become the captain with 35-year-old Mark van Bommel expected to retire from the national team, was the first to stand up for his beleaguered coach.

“”We can’t blame the coach for this, he did a great job for us in the last four years,” said Sneijder.

“”But there are some issues in the squad that have to be solved first, like the player who is leaking to the press about our tactical plans before matches.”

The 60-year-old Van Marwijk, honored by Queen Beatrix after the Dutch reached the 2010 World Cup final, still has four years left on a contract that was extended last year.

The Dutch FA (KNVB) were convinced he was the right man to rejuvenate the team for the Euros and the 2014 World Cup.

But after their dismal failure in Ukraine, Dutch media are convinced there is no future for Van Marwijk as national coach.

While the press and the fans blame the conservative manager, who has barely changed his team in two years, the KNVB and several players have offered him their support.

Forwards Robin van Persie and Arjen Robben were less forthcoming after a disappointing campaign for both.

In the case of Van Persie that was not surprising since England’s Player of the Year did not talk to the media during the warm-up to the tournament or at the finals.

Robben, who never approached the performances he gave two years ago at the World Cup, spoke vaguely about internal issues in the squad without revealing what really happened.

The media perception is that big egos disturbed the team process like in the past when the Dutch built a reputation for internal squabbling that led to divisions in the squad.

“As players we now have to face ourselves in a mirror, to see what went wrong,” Robwwben said after the Portugal game sealed their exit. “We all failed, players and technical staff, just like everyone was responsible for our success two years ago.”

He said nothing about any frustrations with Van Marwijk but Dutch TV pictures showed the winger telling his coach to “”shut up” during the second half of the 2-1 defeat when he was instructed to help close down the damaging runs of Ronaldo.

KNVB director Bert van Oostveen declared after the opening defeat against Denmark that Van Marwijk’s job was not at stake and he repeated that after the Portugal game on Sunday.

“”Van Marwijk guided his team without any problems through two qualifying campaigns and reached the World Cup final, so he deserves credits for that,” said Van Oostveen.

“”But we will evaluate this tournament in the coming weeks and not only the results but also the technical and medical staff in the organization.”