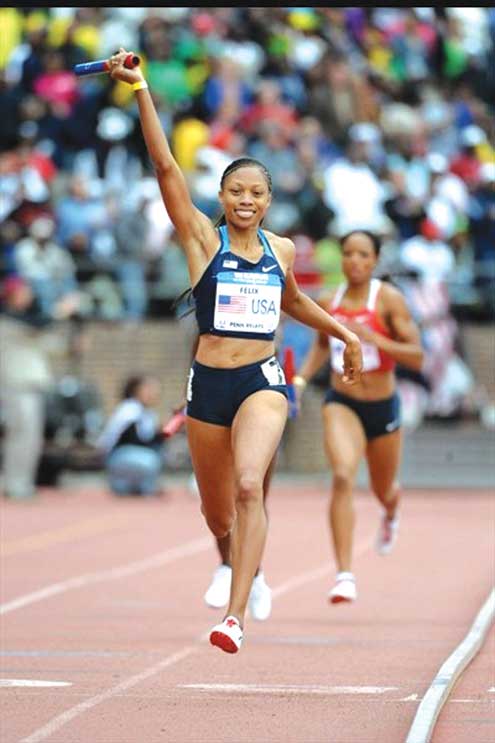 •Allyson Felix in action during a recent tournament.

American sprinter Allyson Felix will focus on the 100 and 200 metres at the U.S. Olympic trials and forgo an attempt at a 400-200 double in London, her coach said.

The decision gives Felix her best chance of winning Olympic gold in the 200 after two consecutive silver medals and for running the 4×100 and 4×400 relays at the Games, Bob Kersee said.

“It will be easier for her, as well as helping the team out, if she runs the 1 and the 2,” Kersee said of the forthcoming trials, which begin on Thursday and continue to July 1.

“If something happens in the 100, she still has enough time to recover and make the team in the 200,” the coach said of the two events, whose finals are a week apart.

Felix attempted to win both the 400 and 200 at last year’s world championships in South Korea, but finished third in the 200 after taking second in the 400. She had won three consecutive world 200 titles before the loss.

“I just didn’t feel like myself (in the 200),” Felix said in April when asked about her world championships. “I didn’t have normal burst in the home stretch.”

She asked Kersee to put more emphasis on speed work this season and they developed a competition schedule that so far has included only 100s and 200s.

She looked exceptionally sharp early in the season, running a 100 metres personal best in Doha.

But a fourth-place finish in her latest 100 in New York on June 9 left some wondering if she would attempt more than just the 200 at the trials in Eugene, Oregon.

“We weren’t quite prepared to run the 100 in New York, but we ran it anyway,” Kersee said. “But we have had some good training since coming back.”

World champion Carmelite Jester leads a strong group of 100 runners at the trials and Sana Richards-Ross, the year’s fastest at both 200 and 400, is expected to challenge Felix in the 200.

Only the top three finishers in each event make the American team. There are no exceptions.