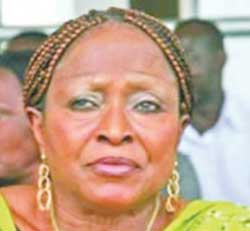 Former board member of the Nigeria Football Federation, NFF, Princess Bola Jegede, has slammed the federation for the $1000 match bonus given to the Super Falcons’ players for the team’s 4-0 win against the Mighty Warriors of Zimbabwe at the Teslim Balogun Stadium, Lagos.

The NFF had earlier promised a 75 percent bonus increase if the Falcons qualified for the African Women Championship, AWC, in Equatorial Guinea.

NFF announced the incentive to the players recently after watching them post an impressive 3-1 win over an Abuja All Stars team which included former Plateau United star Anietie Ukoh.

Jegede, chided the NFF for reneging on its promise to increase the players allowances, adding that the players also have responsibilities in their respective families.

“It is unfortunate that the players were given $1,000 match bonus having qualified the country for the AWC. The NFF needs to realise the fact that these players are also breadwinners of their various families,” said Jegede.

The former NFF topshot appealed to the federation to review the current match bonus of the Falcons to reflect what is paid to the Super Eagles’ players.

“The match bonus of the players is too small for them. What is sauce for the goose is sauce for the gander. The government should pay the girls the same amount that they are paying the Super Eagles’ players,” concluded Jegede.