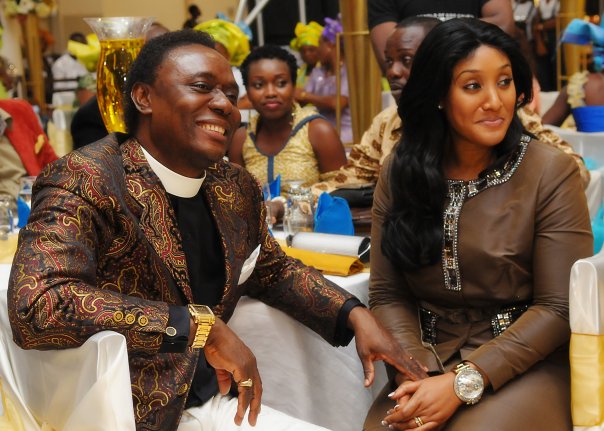 The glamorous marriage between Kris Okotie and his beautiful wife, Stephanie, has crashed less than four years after their big wedding, the funky preacher announced today.

In a dramatic announcement after a moving ministration, the controversial pastor of the Household of God Church and three-time presidential candidate, told his church their differences were irreconcilable and the couple had divorced.

“Stephanie and I are no longer married. We have separated. You can see she’s not in church today. It’s due to irreconcilable differences and you should please respect our wishes at this time because there is no going back.” With this terse statement Okotie announced the break up the marriage.

P.M.NEWS learnt that the congregation couldn’t believe the shocking news they had just heard from the charismatic former pop star turned cleric and politician.

Okotie reportedly made the announcement which invariably spoilt the day for most of the worshippers who had earlier had a very memorable brethren’s’ birthday celebration characterised by soul lifting songs, dancing, prayers, ministration and cutting of the cake.

While Okotie is divorcing for the second time, Stephanie has now been married three times and has three children from her first two marriages.

The break-up also puts an end to dream twins that Okotie expected her to deliver someday.

On 7 August, 2008, Okotie married Stephanie Henshaw, the woman he described as the most beautiful on earth, in a glamorous wedding attended by a horde of journalists and celebrities.

The funky preacher and celebrity singer had directed wealthy members of his church to donate millions of naira in gifts and cash and they made it one of the biggest and most-talked about wedding that year.

There were 12 committees made up of members born in each month of the year. Members born in the month of June, Okotie’s birth month, contributed the most. The eloquent preacher was born on 16 June, 1958, in Delta State.

Aside this, Okotie had selected 120 members, 10 from each month to form the wedding train. Each of them wore aso ebi.

The celebrity pastor also invited two journalists from each media organisation in the country to give total coverage to his second marriage.

Okotie’s traditional wedding took place on 7 August, at 6 George Street, Ikoyi, Lagos, by 2 p.m. while the registry ceremony followed the next day, Friday, 8 August, at the Ikoyi registry, at 4 p.m, and the thanksgiving and benediction took place on Sunday, 10 August, at the Household of God Church, Oregun, Ikeja, Lagos.

The clergyman told his church members early that year that he would be getting married to Stephanie because of her beauty which he described as angelic.

The eloquent preacher had also said that Stephanie has been under his watch for five years and did not mind the number of children she had from her previous marriages.

Mid-2007, when Okotie made his choice public, his church almost broke up as some female celebrities who thought they were the favoured candidates for ‘the post‘ of Mrs. Okotie, received the shocker of their lives when he settled for Stephanie, the unassuming woman in his glamorous church.

Ladies like Sola Salako, church administrator for several years and Okotie’s close aide; Vien Tetsola, a former Miss Nigeria; Ure Okezie, daughter of former minister, Dr. Okezie, and others, were rumoured to have left the church because of the announcement.

Celebrities such as Mofe Damijo and many others were also said to have simply quit Okotie‘s church then, while some have reluctantly returned.

Okotie’s marriage to Stephanie was his second attempt at matrimonial life. He was first married to Tyna his long time friend, but the marriage packed up after 17 years without any child.

Okotie loved his first wife so much that there was hardly a sermon in which he did not mention Tyna.

Long after they separated, he still spoke about her with deep emotions as if they were still married.

So much did Okotie talk about Tyna that some of his admirers in the church became jealous. But when he announced that he was set to marry Stephanie, he hardly mentioned the name of his first wife publicly.

Stephanie then became his centre of attraction.

On one occasion, Okotie invited Stephanie to the altar for a formal introduction.

Pastor Chris Okotie, founder of Household of God Church, Oregun, Lagos, is another firebrand preacher that often sends his audience into ecstasy.

He is also known for televangelism, and for preaching the end times which he titles The Apocalypsus.

In his messages, Okotie always reveals his knowledge of the book of Revelations beyond the ordinary and in a very complicated language which has prompted many to go to church with one or two dictionaries!